After hitting an all-time high last week, analysts at Santiment are evaluating whether Brave's BAT token…

After hitting an all-time high last week, analysts at Santiment are evaluating whether Brave's BAT token can continue to take off.

Brave is a browser that blocks internet page ads and replaces them with advertisements related to cryptocurrency companies, returning part of the revenue to the user through BAT.

Despite fears over the new variant of the coronavirus, which affected not only traditional markets but bitcoin as well, the cryptocurrency Basic Attention Token (BAT) rose to its record high of about $1.90 on Saturday.

In November, Brave announced that the browser would be integrated into the Solana network to support decentralized applications, a move that helped leverage its token earnings. In addition, the project launched the Brave Search search engine to compete directly with Google in June of this year.

Some data show short-term concerns that could lead to an even bigger correction. The on-chain data collected by Santiment reinforced an increase in BAT adoption, but possibly not enough to support the price.

Network-level activity for BAT has returned to normal levels in the last 4-5 days. At the moment, BAT's daily active addresses have dropped to 1217, which could signal a lack of fundamental support for another stage of growth, an analyst at Santiment said.

It is noteworthy that the level of more than 1200 active addresses per day possibly places the BAT among one of the 15 cryptocurrencies on the Ethereum network with the most on-chain activity. However, the trend points to decreasing activity.

Another metric that does not predict the continuation of the climb is the number of new addresses interacting with BAT. That number (indicated in red on the chart below) has recently encountered 3 peaks coincident with price hikes, but has failed to maintain the healthy rally.

“This, of course, doesn't necessarily mean that BAT won't go up further this year, but it would be nice to see a more consistent increase in network level metrics, which would signal a sustained increase in BAT-related interest and blockchain demand. .”, published Santiment.

However, all is not looking bad for the BAT, which is seeing its dollar-invested average age levels fall for the first time since May, suggesting we may be in the middle of another currency redistribution cycle.

The average age of invested dollar (or the acronym MDIA for short) is a metric developed by Santiment in 2019 and is simpler than it may appear. For each BAT unit, they look at how long it stayed at its current address, and then average all these 'ages' and adjust by the price each unit was last traded for on the blockchain.

Simply put, an increasing slope of MDIA points to a period when BAT currencies are – on average – getting 'older', meaning not actively moving between addresses and can signal dormancy across the entire network.

On the other hand, a declining MDIA slope suggests a rapidly declining average “age” of BAT tokens or a network-wide redistribution effort.

As the chart below shows, an MDIA low often coincides with price increases, revealing a possible inverse correlation between the metric and price.

Many BAT sales were made to take profit in recent weeks, as flow data for exchanges reveals. This is normal during a very strong price hike.

Market sentiment data, a metric that takes into account, among other things, activity on social media, is down even though the currency is performing better than 90% of the market.

“Similarly, we would see some signs of growth in BAT address activity in the coming days to keep up with these (for now) moderate expectations from the crowd. Assuming the price continues to fall from here, this could mark a good bullish divergence for the currency.”

*This is not a buy/sell indication, just an educational material that presents data and possibilities.

Why Cardano (ADA) died, but no one showed up for the funeral

Some cryptocurrencies, especially those that were successful until the 2017 bubble, continue to show some unbelievable pumps. Cardano (ADA) is one such case, the meme coin of "peer-reviewed work." Created in 2015 by former Ethereum founder Charles Hoskinson, it had its mainnet launched in September 2017. However, it took an incredible 4 years to […]

The post Why Cardano (ADA) died, but nobody showed up for the funeral appeared first in Portal do Bitcoin . 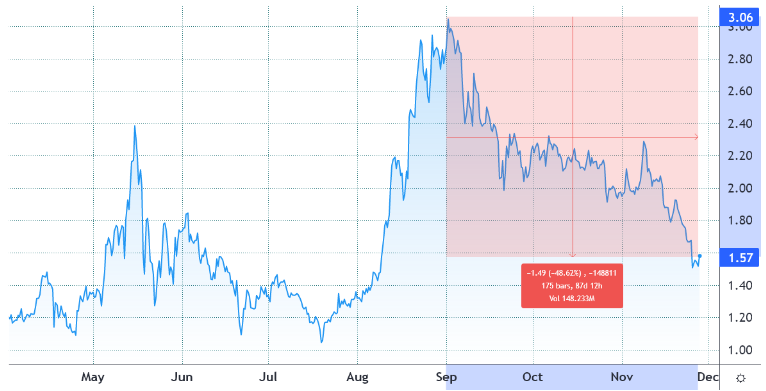