There is a term in cryptocurrencies that perfectly reflects the “mechanism” behind applications supposedly lacking a central coordinator: DINO, or “Decentralized in Name Only”. In other words, it makes it clear that decentralization, in the vast majority of cases, is just a “theatre” to deceive regulators and newcomers. In fact, there is nothing 100% decentralized, because in […]

There is a term in cryptocurrencies that perfectly reflects the “mechanism” behind applications supposedly lacking a central coordinator: DINO, or “Decentralized in Name Only”. In other words, it makes it clear that decentralization, in the vast majority of cases, is just a “theatre” to deceive regulators and newcomers.

In fact, there is nothing 100% decentralized, because ultimately we have people, whether developing systems, using applications, creating consortia ( pools ), voting decisions via utility token, etc.

Practice shows that DeFi is semi-centralized

Uniswap, for example, was born with a $100,000 award from the Ethereum Foundation, but later received funding from investors including Andreessen Horowitz, Union Square Ventures, Paradigm, and Parafi Capital.

Thus, Uniswap was born with a minimum of 39% of tokens among pre-investors and founders, if they didn't receive anything during the airdrops and awards for those who used the application before the token's release. In other words, realistically, they owned at least 50%.

In addition to everything I explained about the pseudo-decentralization of DEX, there are arbitrators, which can be automated and distributed, such as Yearn.finance, or provided by large market maker companies, such as Alameda Research, Jump Trading, and Three Arrows Capital. Without these giants, there is not enough flow.

In short, all this introduction serves to show how it is possible, and likely, that large banks will enter this segment strongly. The recent news of incursions by the giants Goldman Sachs, Morgan Stanley, and Citigroup makes it clear that they are seeking exposure to “digital assets”, and some have even allocated Bitcoin in their investment funds.

The growth of decentralized exchanges is scary, going from practically $1 billion monthly turnover in April 2020 to $117 billion in November 2022. Uniswap is the absolute leader with 65% of this market.

It is possible that one of these banks will decide to buy the company Uniswap, in addition to the share held by these pre-investors. I don't know if Uniswap is the best example, but anyway, one of the 3 biggest DEX.

What changes in practice Everything, as they seek to create "fences", limiting coins on their front-end (access portal), and creating private cooperatives (pools ).

Finally, DeFi will be divided into 2 periods: before and after the entry of major banks. These will bring their own stablecoins , although there will always be some regulated arbitrator able to circulate between these 2 seemingly separate universes.

In the end, users lose the “control”, which they no longer had, of governance, but gain the liquidity of new players. So positive.

Marcel Pechman worked as a trader for 18 years at UBS, Deutsche and Safra banks. In 2017, he became a cryptocurrency trader and analyst. Convinced maximalist, he also subscribes to the RadarBTC Youtube channel .

What is quantum computing and how can it affect cryptocurrencies?

Quantum computing and quantum physics seem like science fiction features: everything is made up of waves and particles, matter can be present in the same place at the same time, and particles can be sent across the galaxy but remain connected. Crazy? Yes. Science Fiction No more. This Decrypt article explores what […] 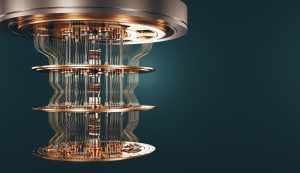