In recent weeks, it has become quite prominent not only in the crypto environment, but also in traditional markets, the word…

The Top 5 Metaverse Games for You to Know Content first appeared in Cointimes.

In recent weeks, the word “metaverse” has become quite prominent not only in the crypto environment, but also in traditional markets.

Especially since Mark Zuckerberg announced the change in Facebook's name to “Meta”, and his entire plan to make the company a great metaverse hub, mixing physical reality with the virtual world.

It's not for less. The metaverse can make great and ancient human yearnings related to technology a reality.

What was previously only possible to imagine when watching movies like “The Matrix” , for example, today there are CEOs announcing their proximity to reality.

Thinking about how to seize opportunities in the metaverse through tokens, regardless of whether you want to play the game or not, we've listed 5 of the biggest games related to the metaverse today. It's worth checking it out!

*This list is not an investment recommendation, it only informs you about the biggest projects related to the metaverse.

Decentraland is a virtual reality platform powered by the Ethereum blockchain that allows users and gamers to create, experiment and monetize content and applications.

Within the virtual world, users buy plots of land that they can later use to build something and monetize.

It's funny that in this game, the land values according to the movement of people in the street. Almost like in real life.

Since then, users have created a wide range of experiences on their virtual terrain (LAND) parcels, including interactive games, extensive 3D scenes, and a variety of other interactive experiences.

Decentraland uses two tokens: MANA and LAND. MANA is an ERC-20 token that has to be burned to acquire ERC-721 LAND (non-fungible, known as NFT) tokens. MANA tokens can also be used to pay for a variety of avatars, outfits, names and more in the Decentraland marketplace.

Axie Infinity uses the “Play-to-Earn” format, where people can earn money in real life by playing a virtual game and, over time, more and more new features are introduced.

In the game, it is possible to generate revenue from the sale of avatars (Axies), and in the future land, cosmetics and consumables. Also, the player can earn the SLP token by winning battles against other players.

Instead of trading them, players can also reproduce their digital creatures, called “Axies”, by burning the SLP and AXS tokens.

The Axie Infinity universe is created on the Ethereum network.

To start venturing, it is necessary to purchase at least 3 creatures or participate in a 'scholarship' like Coingoback Play to play for free sharing the profits with the owner of the Axies.

The price of AXS varies depending on the popularity of the game and the demand of active players.

This business model has created an economy of its own in the Axie network, which is based on the model in which newcomers who want to play need to buy Axie NFTs, while players who are already in the game are also encouraged to create new Axies and profit from their sales.

The hype surrounding the game has led to a sharp rise in the price of its AXS token, which has been rising sharply against other altcoins lately.

Blockchain-based Sandbox is a virtual world that allows users to create, build, buy and sell digital assets in a game format.

Sandbox creates a decentralized platform for a gaming community, which is made possible through the format of DAO (decentralized autonomous organizations) and NFTs.

The platform seeks to introduce blockchain technology into conventional games, allowing users to be creators and players simultaneously.

With users at the center of content creation, Sandbox creates a metaverse of players who contribute to the development of the platform.

The SAND token allows for decentralized governance (that is, users share their views and ideas about project development).

The gaming industry is a huge untapped market when it comes to adopting blockchain technology.

By creating a universe where players can create and collect blockchain-based assets, the Sandbox can evolve significantly along with the market.

Enjin Coin is an infrastructure project by Enjin, a company that provides an ecosystem of interconnected blockchain- based gaming products.

An example of this is the Enjin Network, a social gaming platform where users can create websites and clans, chat and host virtual item stores.

Enjin allows game developers to tokenize game items on the Ethereum blockchain, using the ERC-20 token, to support the digital assets issued on their platform.

This is basically what allows items to be bought, sold and traded with real world values.

For creators and users, issuing blockchain assets through ENJ offers benefits such as: creating utility in games and applications, ensuring instance liquidity, transparency and scarcity.

Another Enjin function, the “melting” function, allows users to destroy their blockchain assets and recover their value, making the token anti-inflationary.

Enabled by blockchain-based tools on which markets for DApps (Decentralized Applications) and NFTs can be built, WAX is a blockchain created to make e-commerce transactions faster, simpler and more secure (for both buyer and seller) .

Its consensus mechanism is quite different from the usual one, the DPoS (Delegated Bet Proof).

According to the company, WAX's delegated Proof of Participation (PoS) engine is 125,000 times more energy efficient and uses less than 0.00001% of the energy of Proof of Work (PoW) networks such as Bitcoin and Ethereum.

WAX, through its personalized resources and incentive mechanisms, seeks to optimize the blockchain's usefulness for use in e-commerce, with the objective of encouraging the voting of proposals, for example.

It also makes use of voting rewards to encourage participation in the selection of block producers and improvement proposals.

According to its official website, millions of NTFs have already been transacted on its network, including collections from Major League Baseball (MLB), the US professional baseball league, as well as famous video games and entertainment brands such as Capcom, Atari and Funko.

*This list is not an investment recommendation, it only informs you about the biggest projects related to the metaverse.

The Top 5 Metaverse Games for You to Know Content first appeared in Cointimes.

Revenue generated from blockchain-based metaverse games could reach $400 billion in 2025, according to a report published on Thursday (25) by digital asset manager Grayscale. The company estimates that the new market, leveraged by NFTs and metaverses like Decentraland, could reach $1 trillion in revenue […] 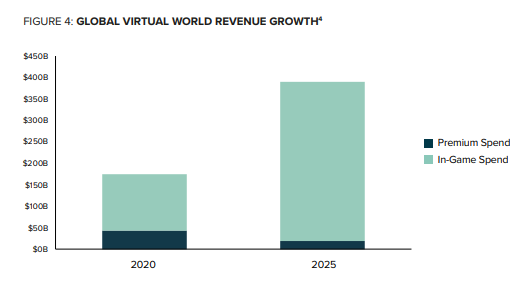