Before applying a coup of R$ 1.5 billion to 7,000 people, Claudio Oliveira, the false King of Bitcoin, had a trajectory worthy of a Netflix series, filled with escapes, forged documents, lies, periods in prison and even a virtual romance started during a court case in Europe. The Federal Police dug deep into the investigations that led to the arrest of Oliveira, his wife Lucinara Silva, and two other people in Curitiba. O Bitcoin Portal had access to material, almost 1000 pages long, documenting a past of schemes to gain people's trust and leave them at total loss. According to the process, the couple, of “humble origins”, possibly “comes over the years seeking to obtain illicit advantages for themselves through fraudulent means responsible for inducing or maintaining third parties in error, causing financial loss”. Before Lucinara appeared in history, however, Oliveira was already telling his lies.

King of Bitcoin: from Goiás to Switzerland

The fake King of Bitcoin, born in 1971, in Anápolis (GO), began to apply scams early in life. In the early 1990s, he obtained five different CPF's in the states of Goiás, Pará, Maranhão, Mato Grosso and Tocantins. In the spellings, his first name appears as “Claudio” or “Claudios”. In the report, the police agency refers to him only as “Claudios”. Back then, he said around that he was a successful businessman, with relatives in Europe and heir to fortunes, a speech used even today. When he opened Bitcoin Banco, he even claimed that he had a doctorate in Financial Engineering. However, according to the Federal Police, Oliveira barely has a basic education and used his wife when he needed to write. In 1995, the police discovered the fraud in the CPFs. Before answering for the crime, Oliveira took a passport, got a visa and fled to Switzerland, where he received permission to live between 1996 and 2000. In the European country, according to Interpol data cited by the PF, the fake King of Bitcoin, even without speaking English, he was responsible for the bankruptcy or dissolution of four companies. The loss was around 2 million Swiss francs (R$ 11.4 million). There, he became the target of investigation for embezzlement, abuse of trust, mismanagement and forgery of documents. Afraid of arrest, he fled to Portugal, but was captured and extradited to Switzerland in January 2006, where he was provisionally detained. In June 2007, he was released on probation pending trial. Exactly a year later, he was sentenced to 30 months in a closed regime, but he has not served his sentence.

Before being locked up, Oliveira met Lucinara on the internet (to whom he is still married), who lived in Santa Catarina. Chat comes chat comes, she traveled to meet him. The two, in Bonnie and Clyde style, fled Switzerland, where an arrest warrant is still open against him. Those then in love passed through Barcelona, ​​Spain; Lisbon, in Portugal; and Nice in France. In 2009, they returned to Brazil. In the country, Oliveira created a new CPF and decided to marry Lucinara. They lived in Santa Catarina, Goiás, São Paulo and, finally, in Rio de Janeiro. Everywhere he passed, Oliveira, with “advanced deception techniques”, sought to relate to people with a high financial profile and convinced them to hand over money. The modus operandi, according to the PF, was as follows: "Build a false identity, insert yourself in the social environment, raise money from third parties with persuasion techniques, use these resources for your own benefit and escape from this environment when victims discover the fraud" . Lucinara, according to the PF, was used by Oliveira as a “tool” to leverage the reach of his crimes. As he doesn't know how to write properly in Portuguese or speak English, she corrected and translated the texts sent by the scammer to the victims. In 2008 message exchanges, it is possible to see serious spelling and grammar errors of the fake King of Bitcoin.

In 2013, after a season in Brazil — a period in which they capitalized on more scams — they moved to Miami, in the United States. In the city, they created a financial plastic surgery pyramid. They also launched a kind of raffle in which part of the funds raised would be used to help people with cancer. The two even started to relate to businessmen, always with the discourse of being successful people. In an e-mail intercepted by the PF, a victim reported that Oliveira managed to extract US$ 221,000 from him in just six months. Others harmed also began to charge the couple. They were even evicted from the property where they lived, leaving more debt and victims behind.

Excerpt from the e-mail of one of Oliveira's victims (Source: Federal Police)

With problems in the United States, the duo left Miami and decided to return to Brazil. In flight, by land, they passed through New York, Tijuana, Mexico, and Panama. Finally, they returned to Brazil, where they lived in Brasília, Santa Catarina and Goiás, always applying scams. In September 2016, the couple arrived in Curitiba (PR), with the support of a man involved in the illegal diamond trade. In July 2017, Oliveira created a new ID in Paraná. In September of that year, Luciana received from Oliveira the first e-mail of the NegocieCoins exchange, one of the Bitcoin Banco Group. According to the PF, the "King of Bitcoin found in the environment of virtual currencies a characteristic that allowed a criminal leverage in millionaire parameters never before imagined, since the blockchain technology is very little known". The outcome of the story with the cryptocurrencies, as it is already known, ended up in prison this week.

Sun Jul 11 , 2021
Crypto.com, the global cryptocurrency exchange, made its debut as an official sponsor of the UFC (Ultimate Fighting Championship) on Saturday (10), in Las Vegas (USA), at the 264th edition of the biggest MMA (Mixed Martial Arts) event in the world . The partnership, announced last Wednesday (7th), foresees the investment […] 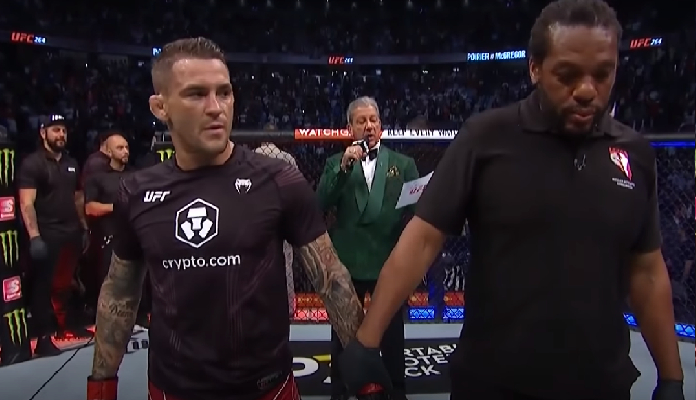