A text, produced by Igor Puga – Marketing Director at Santander, published in Meio&Mensagem magazine and reproduced on the portal braziljournalwith the name “NFTs – Don’t Push Too Much”makes some criticisms against the NFT market.I agree with many points raised by Igor Puga, but in the second half of the text I found some errors, or points that I do not agree with and I would like to share, not only the correction of these points, as it is important for the market, but also my personal opinion. points of disagreement, then the reader can assume that points not covered in this article are due to agreement on my part with the original author.

What are you really buying?

At this point, we probably agree, but for different reasons. 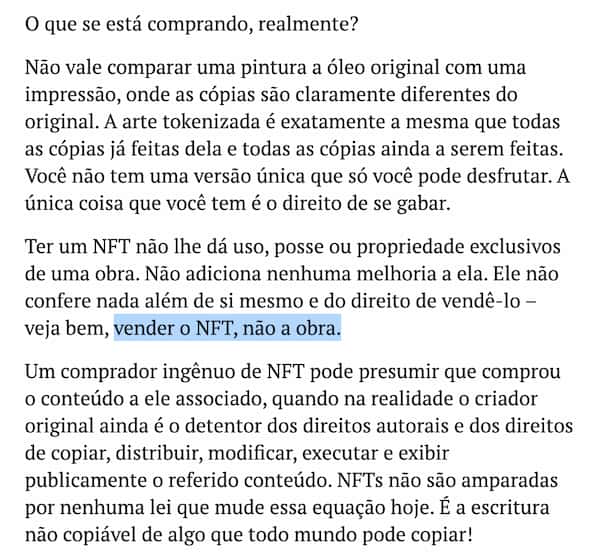 I agree with Santander’s marketing director that what is bought or sold, as he says in the second paragraph of the image, is the NFT, not the work. And the criticism is valid when it illustrates the existence of a naive buyer who presumes to have bought the work, so as a way of educating people about what they are actually buying is important, but that does not invalidate the technology. The non-fungible token remains unique to the buyer who understands what they are buying and continues to have value if it has an application in the real world. Who established that what is being negotiated is an image .jpeg easily reproduced? In addition to newbies (who will find out they are wrong), scammers, gullibles or ‘haters’? And when I say ‘haters’, I mean people who are critical of something for the sheer pleasure of criticizing, usually through half-truths, incomplete information or empty allegations, without evidence or foundations. Not that this is the case with Igor Puga, here (it is not)since so far he has been very knowledgeable about the technology and the ecosystem. As I said, I agree with him on this point, but I believe it is for different reasons, as he has shown to try to use this argument to invalidate the entire industry , when in fact it only exposes an immaturity of the market that, possibly, will be resolved with time. blockchain. This token is protected by cryptography and is interpreted as a hash – a sequence of random characters linked to a digital signature. want to use your token as a guarantee of membership in a club super select of millionaires, like ticket for a one-off event, such as scripture or document that determines ownership of an item in the real world (or digital, why not?), or even to “(…) bragging rights”; according to Puga, so be it. What matters is that there is a technology that allows this and other uses. And people are willing, for subjective values ​​or not, to pay a certain price for them… Whatever.

What does an NFT add to the gaming community?

Speaking of the use of NFTs in games, Igor states that: “The overwhelming majority of games already make use of microtransactions offering a variety of virtual items and in-game products, while marketplaces like Steam have long allowed players to trade directly with each other.”

Which is true, I agree, but I don’t think the comparison is valid, nor that the existence of NFTs do not bring benefits for the ‘gamers’or that don’t add anything to the community; as he also stated in the rest of the paragraph. Steam is a centralized platform, owned by a company that has full control over everything what happens there. An intermediary, hitherto necessary.Blockchain is a technology that was initially created with the aim of avoiding the need for an intermediary.Not that he can’t exist, in some cases the middleman does exist and some people are fine with that, but he doesn’t need to exist. And that’s the wonder here; the really important point. Even when the intermediary exists – I personally believe that its existence neutralizes part of the benefits of the technology, the ideal is to have no intermediary, or for it to have as little weight as possible in the ecosystem – its power is limited. With an NFT , the player does not need the Steam server to be online, or for Steam to allow him to trade his item, or to trust that the sale amount will be sent to his account by the platform’s finance team. Or fear that any problem could happen in the middle of the process and lose what belonged to him, or be prevented from using. A player can trade directly with another player, in a format end-to-end (peer-to-peer) and receive payment for it, in the same decentralized and secure way, in your wallet. It doesn’t have to be limited to just one marketplace, because the token is stored on the blockchain that can be accessed from anywhere through a node or a wallet, both with a private key. The intermediary is the keyword. And I agree that many people in the market are not taking full advantage of the technology’s potential, by remaining dependent on intermediaries or centralized platforms or by acquiring tokens whose use is limited within a closed and centralized ecosystem (as is the case with some play-to-earn games). But again this is not a problem of technology, but of the use to which it is put.

When talking about environmental impact, the author is also wrong, bringing a generalization of the entire crypto industry and NFT technology in a specific problem of two networks, caused by a specific type of consensus technology (proof of work – PoW) and that is being resolved by both, either through migration to a lower impact consensus method – in the case of Ethereum -; as in the search for creative sustainability solutions for Bitcoin mining. 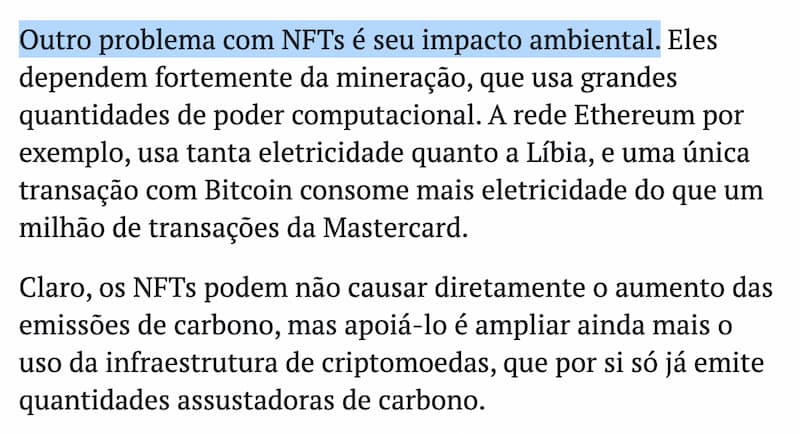 But yes, I totally agree with the author that the environmental impact is a problem and, even with sustainable use, the emission of carbon gas is a concern. (and perhaps increase) in the market, is that my long term investment portfolio today it is made up of assets whose technology solves this problem. In agreeing with the issue of environmental impact, I could say that this is not a problem of NFTs, much less of cryptocurrencies, as Puga stated, but of two very specific networks that, for some reason, they are market leaders in capitalization.Supporting NFTs it is not “expand the use of infrastructure” that is harmful to the environment. Believing that the universe of NFTs and cryptocurrencies is limited to the two projects with the greatest impact, yes. There are many blockchains with very little energy consumption and CO2 emissions, which could be considered more sustainable.To exemplify with two that I really like (*I have in my portfolio) and that are very focused on reducing energy consumption and CO2 emissions, either out of genuine environmental concern, or to achieve greater efficiency with lower resource costs:

THE nano (XNO) would be in response to criticism against Bitcoin and all “the cryptocurrency infrastructure that by itself (…)”. Nano is a protocol whose sole purpose is to be peer-to-peer digital money and a transaction in nano uses 15,500,000 times less energy than a bitcoin transaction. 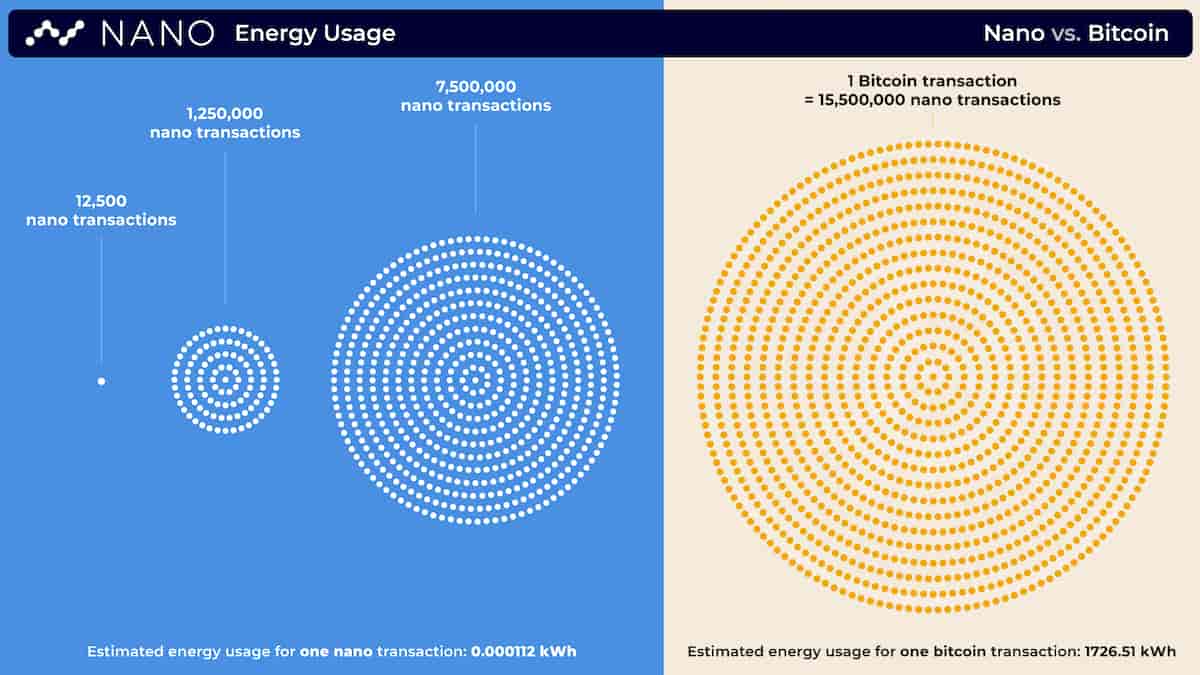 THE Avalanche (AVAX) would be a response to the criticisms related to Ethereum and an alternative for using NFTs in a more sustainable way, since it is a direct competitor to the previous one, but which still manages to communicate with the EVM (ethereum virtual machine) and transact tokens ERC-721 (the token standard used for NFT on ethereum). 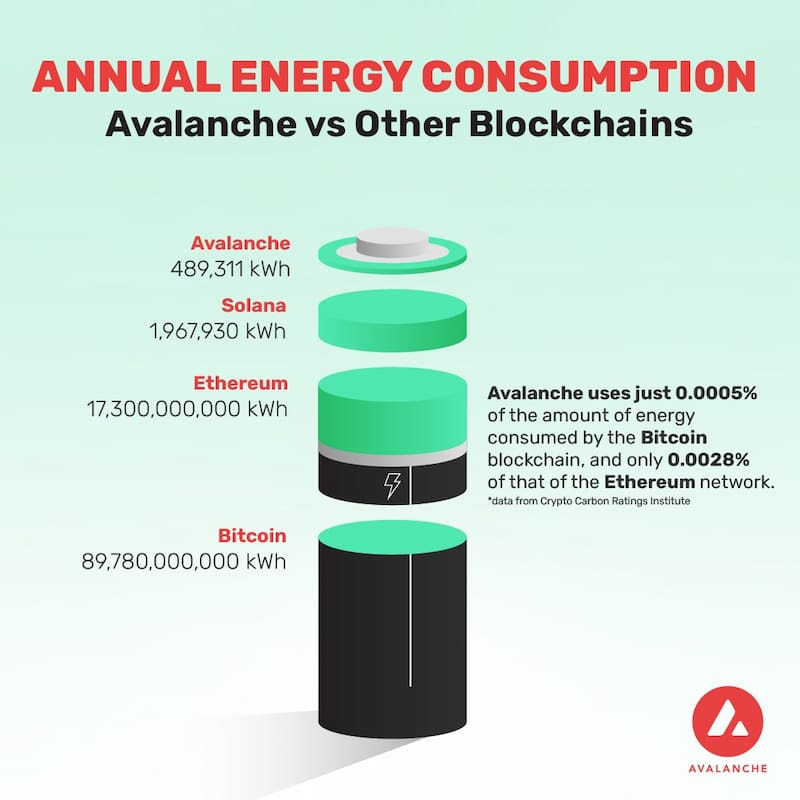 The Avalanche network currently uses 35,355 times less energy than its competitor, but this number (provided by the avalanche team itself) must be received critically, as the measurement is based on annual consumption and not consumption per transaction and, in this case, it is obvious that the networks more used will have a higher consumption. In any case, the AVAX protocol manages to offer an alternative to energy consumption due to the absence of mining and a new consensus technology that allows greater scalability and less use of resources. Other networks also present more efficiency in this sense, like wax (WAX), fantom (FTM), Solana (SUN), cardano (ADA), etc.

When talking about the perpetuity of NFTs and making a comparison with other physical goods is where Santander’s marketing director makes his biggest mistake. 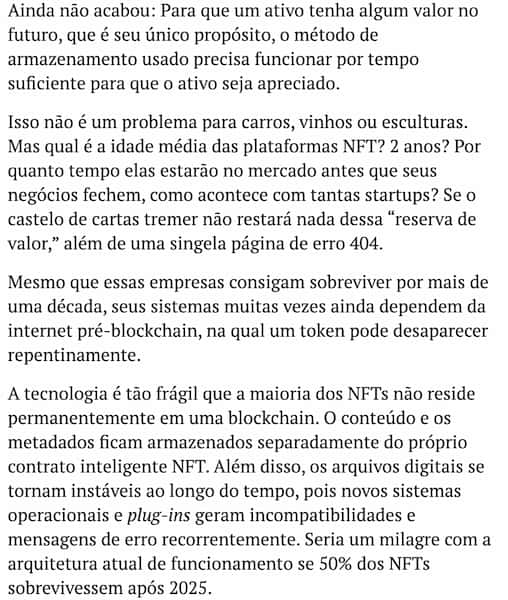 Since he criticizes the perenniality of NFTs, but uses the perenniality of centralized platforms that are intermediaries in the trading of NFTs as if they affect the “lifetime” of the token. Not true. OpenSea and other platforms may end, but while blockchain where the token is registered if it remains active, the token also remains “alive”. It ends up getting into the same issue that I mentioned about Steam and its use in games. Many people make the same confusion and this is perfectly normal, mainly because the market is still very new, immature and is heavily concentrated in a few intermediaries, but this tends to change over time. However, the criticism about most NFTs not residing on the blockchain, but in smart contracts or “second layers”, is valid and I share the same concern. I do not store wealth in tokens off-chain or centralized smart contracts and I don’t recommend anyone to do the same. But again it’s not something that invalidates the technology that, ironically, was created exactly to solve these problems.

The rest of the text – its ending – ends up being a more personal conclusion of the author himself, with a subjective opinion about the market and he has every right to maintain that opinion. crazed, filled with “ponzi” schemes, pyramids, immoral and unreasonable greed, but I don’t think that sums up the whole market and the whole industry.There are excellent projects that want to solve real problems and there are people in the market who are really looking for these projects.Sometimes it may seem difficult to “separate the wheat from the chaff”, but it is not impossible. I am optimistic that speculative madness tends to diminish as demand increases and bad and/or fraudulent projects fall.

Igor Puga has done an excellent job of trying to alert people to the problems he sees in the industry and I respect him a lot for thatmainly because he is a person with a relevant position and who makes himself a little vulnerable to the harshest criticisms, when he talks about subjects that often move people’s emotions a lot. But also, for the same reason, I believe it is equally important to correct some mistakes, because only then can we grow and evolve as a market, but more importantly, as people.Buy and sell Bitcoin and other cryptocurrencies on Coinext
The complete broker to safely and conveniently invest in the most traded cryptocurrencies in the world.
Register and see how simple it is, visit: https://coinext.com.br

Vitalik Buterin: Putin's military operation is a crime against the Ukrainian and Russian people

Thu Feb 24 , 2022
The Ethereum co-founder is firmly against Russia’s aggression against Ukraine and calls the military action a “crime.” Today (February 24), the Russian military launched a “special military operation” (as Vladimir Putin calls it) in Ukraine. However, everything seems to be the beginning of a large-scale invasion, which could disturb the […] 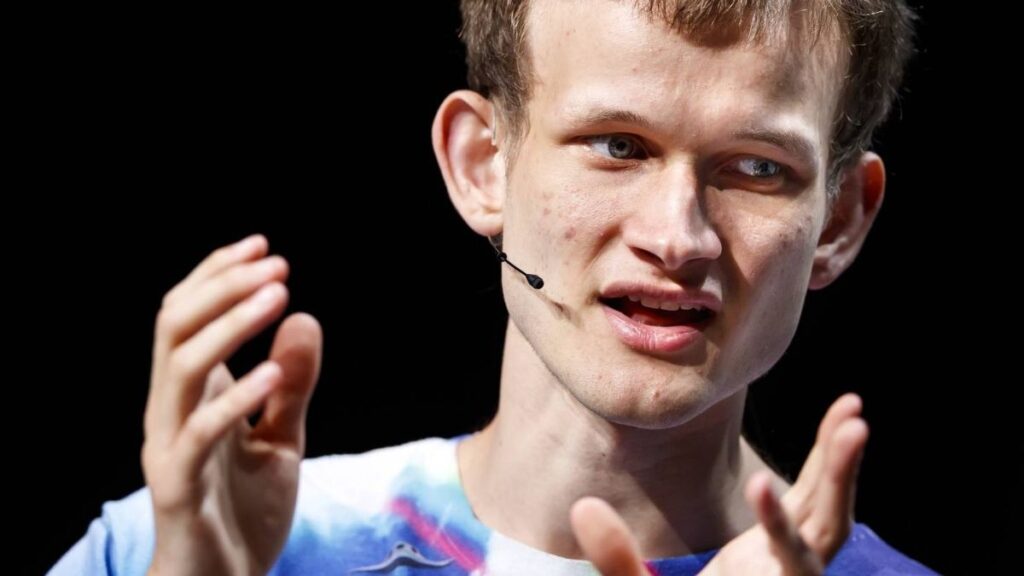