Russia is preparing to abandon the international SWIFT payment system, said Maria Zakharova, spokesman for the Russian Ministry of Defense, in an interview with RT.The SWIFT, or BIC, is a universal code of 8 to 11 characters that identifies the banking institution in the process of international transfers. SWIFT's initials stand for Society for Worldwide Interbank Financial Telecommunication, while the term BIC is an acronym for Bank International Code. And Russia is preparing to leave it. According to the spokeswoman, disconnecting from SWIFT was “hypothetical” today, but not impossible. “The possibility of being disconnected from SWIFT is still considered hypothetical. However, inter-ministerial work is underway to minimize the risks and economic damage if our country's access to the usual international financial instruments and payment mechanisms is limited. The Bank of Russia's Financial Messaging System is an example of such alternative instruments. At the moment, options for pairing with foreign counterparts – European SEPA, Iranian SEPAM, Chinese CUP and CIPS, are being discussed, ”she said.

Zakharova pointed out that cooperation between the Russian “MIR” payment system and foreign counterparts, in particular the Chinese UnionPay, the Japanese JCB and the international Maestro, are developing. These payment providers operate in Russia and abroad. However, it is too early to talk about the specific time for the completion of a comprehensive national toolkit for payment transactions and their promotion in international markets, as this is a long and time-consuming process. “In parallel, Russia is actively exploring the opportunities offered by modern digital technologies, the potential for their use to increase the stability and independence of the national financial system and means of payment, with the clear understanding that digital money may in the future become the basis of the international financial system and cross-border settlement operations, "concluded a spokeswoman for the Russian Ministry of Foreign Affairs." Similar co-branding cards work in Russia and abroad. In particular, several operations on them are already available in Armenia, Abkhazia, South Ossetia, Belarus, Kazakhstan, Kyrgyzstan, Uzbekistan, Turkey, ”she said. Andrei Krutskikh, Director of the Department of International Information Security at the Ministry of Foreign Affairs from Russia, said the Russian side is ready to respond if it is disconnected from the international payment system SWIFT. This move has been going on for almost 3 years. Russia has been trying to push its “Mir” payment system since 2019, with Russian lawmakers supporting the international use of an alternative Russian system for the global SWIFT financial messaging network, designed by Moscow to eliminate the risk of Western sanctions. At that time, Russia held talks with China, India, Iran and Turkey on the joint use of the system of Russian financial messages, said Anatoly Aksakov, who heads the Russian Banking Association and a financial committee with the lower house of parliament “As the system has proven to be viable and efficient, it attracts the interest of Russians and foreigners. It is proposed to give any legal person, Russian or foreign, the possibility of using it ”, said Aksakov. The number of transactions involving the dollar between China and Russia fell by almost 50% between 2015 and 2020:Dollar settlement in trade relations between Russia and China This is becoming increasingly clear as the sanctions that the U.S. and the EU are pressing on Russia and China are bringing the two countries closer together. More recently , China's Foreign Ministry said that US sanctions against Russia are tantamount to intimidation at this point. “The US has announced new sanctions on Russia. The arbitrary use or threat of unilateral sanctions in international relations is nothing more than a policy of power and intimidation, ”said Hua Chunying, a spokesman for the Ministry of Foreign Affairs of China, on Twitter. She added:“ China rejects such behavior. ”These movements have caused the dollar's share of BCs' global reserves to decline to its lowest level in 25 years, according to data compiled by Bloomberg:Losing space, the dollar has the biggest fall as a reserve in 25 yearsText adapted and translated from ZeroHedge.

Thu May 6 , 2021
The cryptocurrency market investor needs more protection in the U.S., including possible regulations for cryptocurrency brokers, Securities and Exchange Commission (SEC) chairman Gary Gensler said on Thursday (6). who became the president of the federal securities regulator, Gensler said the SEC's authority is restricted to securities and products or asset […] 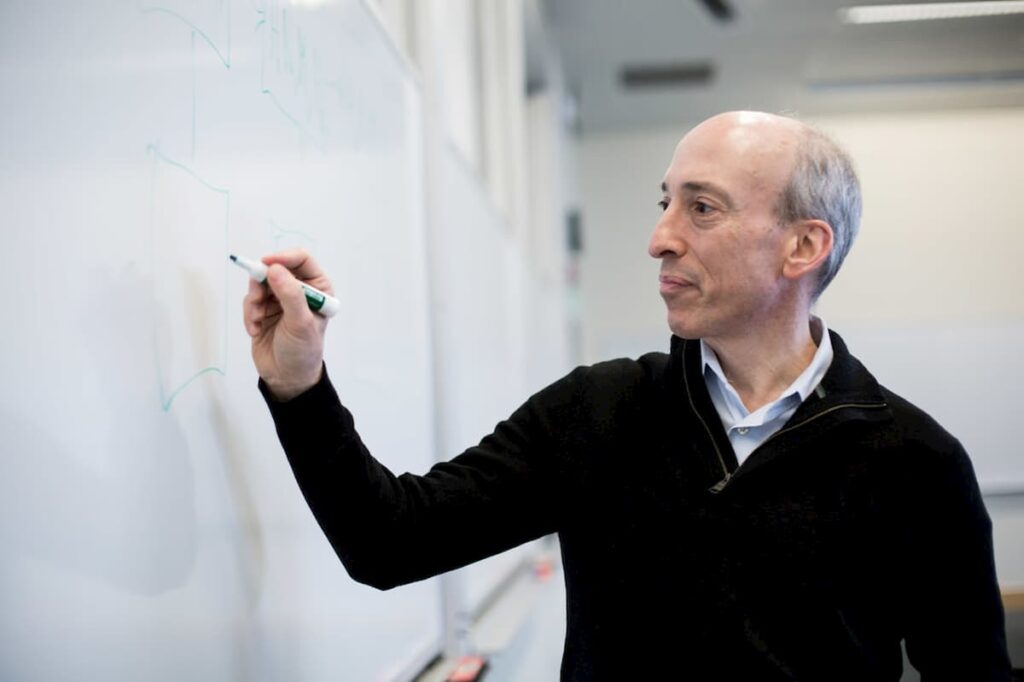