The sharp drop in the price of Bitcoin (BTC) and other cryptocurrencies at the end of this week which reached almost 10% on Friday (6) is being accompanied by similar losses in traditional equity financial markets such as the S&P 500, Nasdaq, Dow Jones, Ibovespa. These are indicators that began to plummet after an increase in US interest rates by the Federal Reserve (FED) in the United States, on Wednesday night. This joint drop, influenced by a common macroeconomic factor, has raised doubts among investors about one of the most traditional certainties of cryptocurrencies: that they would be uncorrelated assets. The idea is that – unlike traditional markets – crypto assets, especially Bitcoin, would be little influenced by external economic factors such as commodity prices and countries’ monetary and fiscal policies. After all, can Bitcoin still be considered an investment that is not influenced by external factors? In March of this year, financial research firm Arcane Research analyzed three previous months and stated that the correlation between the top cryptocurrency by market cap has reached a record point in correlation with the S&P Index. “Bitcoin’s correlation with the S&P 500 has only been higher for five days in BTC history, showing that the current correlation is unprecedented in history,” the company said, as reported by Coindesk.

With this week’s drop, the correlation debate has returned in full force. The group that she is said to be a passenger is led by Michael Novogratz, famous investor creator of Fortress Investment Group and notorious Bitcoin enthusiast. “This correlation will end in time, we’ve already seen it. For example, if Nasdaq drops 9%, crypto will not drop 9%, as it would last year. But I think there’s more pain to come.” André Franco, head of research at Mercado Bitcoin, says that momentarily the situation is of extreme correlation with the risk market, but that the history of more than a decade of BTC shows it as an uncorrelated asset. “From what we can see in the picture of the Bitcoin scenario, and which has been going on at least since the beginning of the year, Bitcoin has been very correlated with the risk market, such as Nasdaq and even S&P. So we see that Bitcoin momentarily ceased to be this uncorrelated asset”, he says “But when we talk about its history as a whole, it is not yet the time to talk about having ceased to be an uncorrelated asset, because history shows that it is a great diversifier over longer periods of time”, he emphasizes. Cryptocurrency analyst and trader Marcel Pechman understands that it is normal for traders to have greater influence on ups and downs, and they fear that the U.S. Federal Reserve’s contractionary policy to contain inflation will have a negative impact on risky – but temporary – assets. . “However, after a few days or weeks, investors realize that the eventual negative pressure on economies only strengthens the thesis of the need for a decentralized and scarce currency. Therefore, analyzing longer cycles, this correlation that appears to ‘copy’ the price trend of traditional markets disappears”, he says. Cazou Vilela, CMO at Zro Bank, understands that Bitcoin is currently starting to feel the impact of macroeconomic forces and that the mass adoption of the cryptocurrency may have strengthened this correlation. “But I believe that, in the long term, society should understand more clearly blockchain technology and the real purpose of Bitcoin: a deflationary currency, whose issuance is done in a decentralized manner and independently of governments and financial institutions. From this better understanding of the asset, it is seen by investors as an alternative to escape from inflation and global crises, being widely used as a store of value. With the consolidation of this scenario in the future, this current correlation of Bitcoin with traditional riskier assets such as stocks, derivatives and futures contracts should be dissolved.” One of the pioneers of Bitcoin in Brazil (on the market since 2011), Dolan Norris Mica (pseudonym) also demonstrates his belief that it is a passing correlation. He commented in response to Avelino Morganti, who was a Bitcoin enthusiast and now denies it, saying he is in favor of gold as a primary investment. https://twitter.com/dolan_mica/status/1522566398974824448

On the other hand, there are also experts who have the opposite view. Michelle Mafra, Senior Manager of Blockchain and Cryptoassets at Bybit in Brazil, thinks it is premature to say that BTC has once and for all in other assets and markets, but points out that this scenario is happening more and more. “Despite the recent price fluctuation of Bitcoin, which in recent years has followed the behavior of world exchanges, it is still too early to say that it has become a traditional asset, which follows market fluctuations. The regulatory scenario around the world and the very signaling of large companies positioning themselves for the adoption or not of cryptoassets as a store of value for their treasuries are examples of events that peculiarly influence their price ”, she says. “On the other hand, in fact, the trend is a bit like this. In the last 3 years the S&P 500 has suffered 3 big drops of 10% or more. During these dips, Bitcoin also experienced an anticipated and even greater dip following the movements of world exchanges. The same happened in the uptrends that occurred in the last 3 years”, completes Mafra. Henrique Teixeira, country manager at Ripio, is even more emphatic in analyzing correlation as a trend. “It is an inevitable move. Since 2020, we are seeing the arrival of institutional investors and also a lot of people who used to work in the traditional financial market starting to work with crypto. In part, this correlation began to exist because professionals use the baggage they have accumulated in these markets, with other asset classes, for their crypto strategies”, he analyzes. “In addition, the wave of global regulation, also supported by previous experiences, also influences this cycle. Bitcoin retains its fundamentals and characteristics. However, its use has undergone transformations and this is part of the market’s maturation cycle. We will still see many transformations until mass adoption takes place”, says Teixeira. Josh Olszewicz, head of research at digital asset manager Valkyrie Investments, said in a Bloomberg report: “Bitcoin is increasingly correlated with trading hours and traditional US market indices, likely due to a combination of rising American institutional presence and absence of China following the sweeping bans last year.”

Luiza Peruffo, an assistant professor at the Federal University of Rio Grande do Sul and a researcher at the University of Cambridge specializing in international monetary policy, says that Bitcoin’s fall in the context of rising interest rates in the US “reminds us that, at best, Bitcoin is a financial asset like any other” and that the international monetary and financial system is still centered on the American currency. “Historically, in times of uncertainty (such as financial crises and wars), investors tend to prioritize the safety of their investments over returns (‘flight for safety’). And the safest asset is still the US dollar and assets denominated in this currency, precisely because they are protected by the material and immaterial power of the US economy. According to the researcher, with the dollar being the safest asset, the Fed’s interest rate hike “only reinforces” the dollar’s ​​attractiveness to the detriment of other investments, including Bitcoin. “We can discuss whether we are experiencing a transition in which other currencies (such as the Chinese) will share this power with the dollar, but at the moment this has not yet happened”, she concludes.

The correlation debate is not exactly new. In 2021, journalist John O’Sullivan, columnist for The Economist, argued that cryptocurrencies are assets that have little correlation with others, which makes them a good thing to have within the strategy of diversifying the investment portfolio – which he highlights as a fundamental principle for any strategy. This took place in September of last year. Soon after, in October, the International Monetary Fund (IMF) addressed the issue in a report. The body stated that crypto-assets are not as uncorrelated as is thought and that this approximation of the world is strengthening. “While this is true to some extent, the correlation between cryptocurrencies and some other major asset classes has increased significantly during recent episodes of market stress (e.g. the sell-off that took place during the Covid-19 pandemic in 2020),” he says. the text. “The benefit of diversification may also diminish over time if institutions and people with large amounts of crypto continue to be affected by common market factors,” the report concludes.

Sun May 8 , 2022
Find the right one tips for you who should choose a company car Published: May 2, 2022, 1:21 p.m.A spacious, four-wheel drive SUV with a state-of-the-art driver environment and advanced design. In addition, with good towing weight and long electric range. Many people have a long wish list when choosing […] 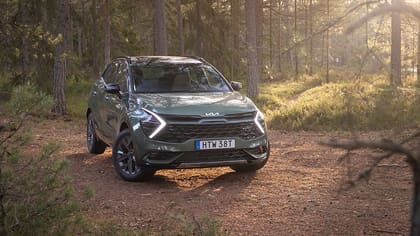