Nubank, the most used neobank in Brazil, now allows its clients to invest in a kind of index that tracks the price of the Bitcoin (BTC) and Ethereum (ETH), but announced the functionality as “purchase of cryptocurrencies”, although the user unable to withdraw purchased assets and the bank does not make this clear, which could lead buyers astray.

Investing in synthetic BTC and ETH on Nubank

The new “cryptocurrency purchase” functionality offered by Nubank had been released only to a few selected customers at first, but is now available to the entire Brazilian neobank user base – around 50 million. Cryptocurrencies stood out in relation to other forms of traditional investments, as it was the first time in the history of the financial market where investors can take full control of their investments. Without having to trust, or depend on, an intermediary, which can suffer service interruptions; hacker attacks (for keeping great values ​​from many customers – becoming targets); arbitrary decisions execution/non-execution of orders; most expensive shopping prices than in the rest of the market; high taxes brokerage; among other things that can happen when you depend on a single intermediary to take care of your money. Although the service is being advertised as “buy BTC and ETH” and, despite the official statement on the company’s blog saying that “Nubank was born to (…) give people control over your own money.” – that’s not quite what the service is offering.

Source: Blog (29/06/2022 – 11:00am) The purchase is actually a kind of investment fund or index that accompanies the quote of Bitcoin and Ethereum and delivers to the customer a “ID” that links you with your buy and sell orders executed by Nubank on another platform. funds from which they are held by another company, Paxos (same company that custodian for Mercado Pago and Paypal). 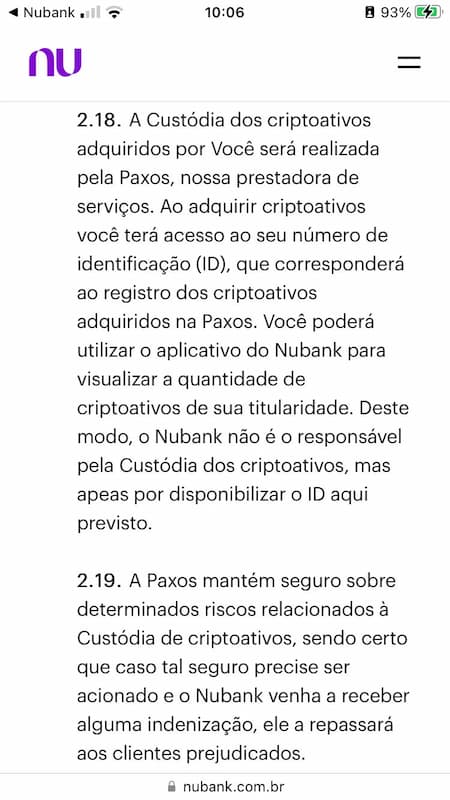 Source: Terms of Use (29/06/2022 – 10:08am) In fact, the Nubank is an intermediary of the intermediary, which uses another intermediary to store cryptocurrencies. Customers cannot withdraw their funds and actually “take control of your own money”according to the mission of the Nubankwhich is who has the full control over the account of users with the custodian, paxoswhich is who has the full control over money (crypto) of each in-app purchase.

And why not being able to cash out is a problem? Because this creates a direct dependency on the Nubank service

Imagine, for example, that the application undergoes maintenance, or stops working for a few hours, just before a big drop in the price of Bitcoin and you are unable to enter to sell the synthetic “units” you have in your wallet with the Nubank. The same could happen with an arbitrary decision to simply not execute your sell orders, as provided in the terms and services – which most people will not read. Or run latewhere the bank itself could go ahead and sell its own assets before its customers, in case it has a very large volume of sales that could drive the price down, obtaining privileged information. 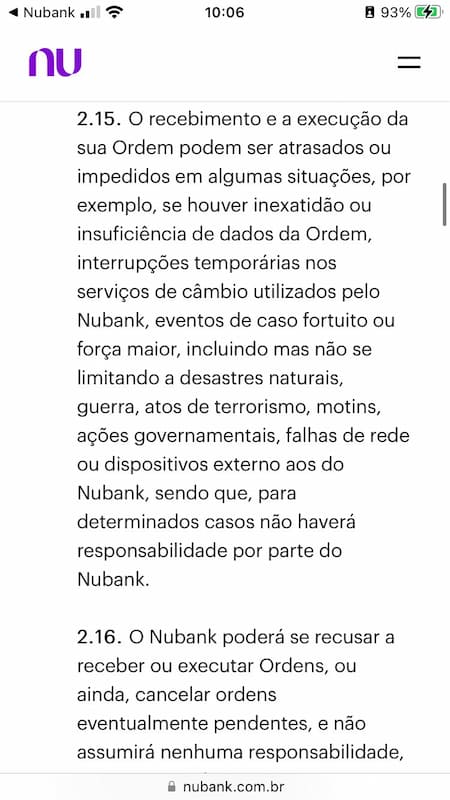 Source: Terms of Use (29/06/2022 – 10:06am) When the app works again, or Nubank decides to execute your order, the price has already dropped well below than you would be willing to sell and you missed the chance to protect your capital. Our worst… Let’s say that, because of the drop, the app loses interest in offering the services (for whatever reason, as with many companies in big drops) and now it even transforms the amount in BTC and ETH you have to the proportional in reais (at a loss), as this is the only option after buying… Sell.

The scenario becomes even more worrying when we realize that there is no clear communication from the bank regarding withdrawals.

On the in-app purchase pages, at no time do they say that it is not possible to withdraw the coins. Not even in the terms of use we find any mention of the word loot/redemption or similar (until today, June 29, 2022). 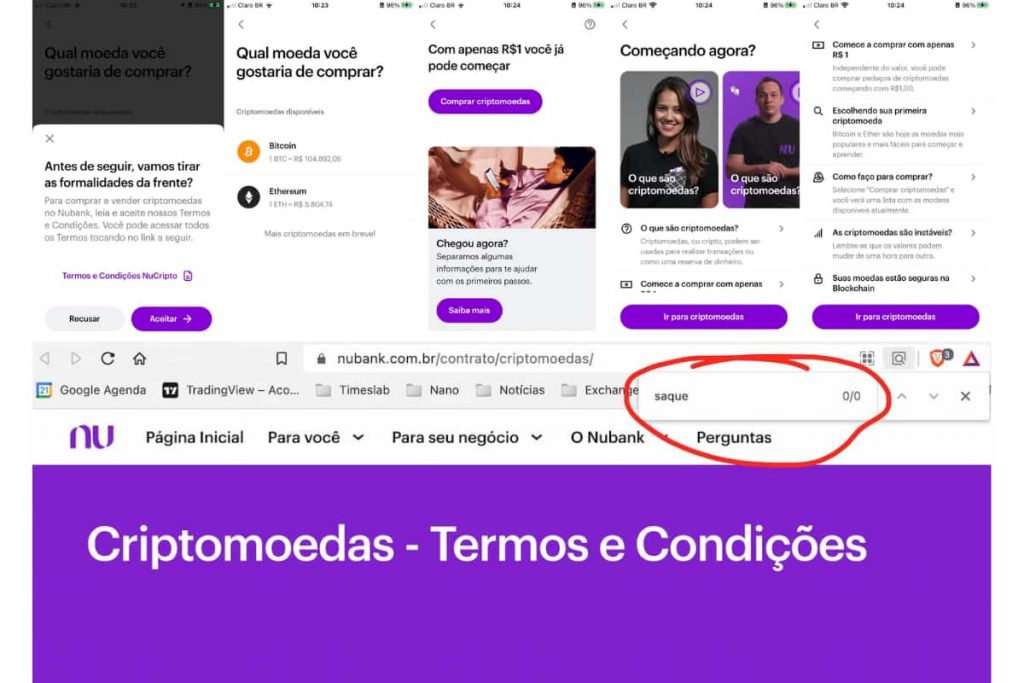 Take control of your money!

There is a common saying among cryptocurrency enthusiasts: “Not your keys, not your coins”; or “If you don’t have the private key, the coins are not yours”. While there is an intermediary doing the custody, or controlling your buy and sell orders, cryptocurrencies are not really yours. In unexpected situations – as has been happening a lot – completely depending on a company can really mean losing a lot of money. When you buy crypto and take real control of your money, you can sell it on other platforms in case one or the other stops working. And it may even decide not to sell, waiting for the next bullish cycle to not take the loss. Many are saying that it doesn’t matter and that the service provided by Nubank and other companies such as Mercado Pago and 99Pay, which offer something similar, is positive for the market as it takes the complexity out of investment and allows more people to participate, but without the possibility of looting, the possible negative consequences are many.

Educating yourself is part of the act of investing!

And as Nubank himself said, take the opportunity to take full control over your money. Unfortunately, at this time, this will not happen with these platforms for buying and selling synthetic cryptocurrencies. I hope this changes in the future.

Seek information and never invest in something you don’t understand.

FTX CEO Sam Bankman-Fried warns that some crypto exchanges are already insolvent, with more to follow 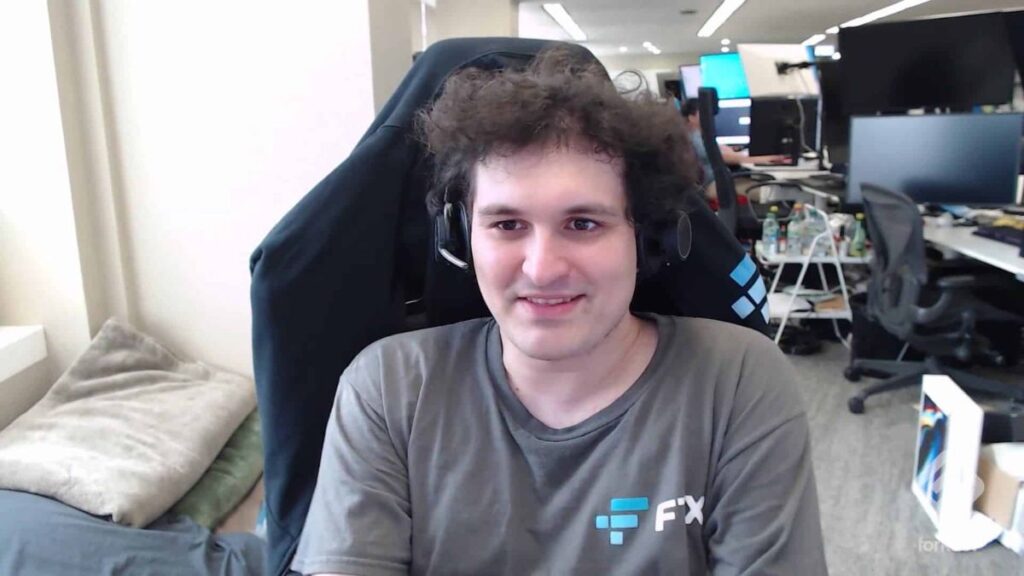