One of the most traditional companies in the gaming industry, Electronic Arts (EA) has yet to enter the crypto games and non-fungible tokens (or NFTs) industry. One of its great opponents, Ubisoft has already begun to immerse itself in this world. EA's CEO sees potential in the sector, […]

One of the most traditional companies in the gaming industry, Electronic Arts (EA) has yet to enter the crypto games and non-fungible tokens (or NFTs) industry. One of its great opponents, Ubisoft has already begun to immerse itself in this world.

EA's CEO sees potential in the industry, calling NFTs and play-to-earn models this week "an important part of the future of our industry."

At a quarterly earnings information conference on Wednesday (4), Andrew Wilson, chief executive of EA, was asked about the opportunity the company (creator of huge franchises such as FIFA, The Sims, Battlefield and Madden NFL) has. see in the sector.

“I think the talk about play-to-earn and NFTs is still very, very early and there's a lot of debate. At one level, there's a lot of hype [about NFTs],” he replied, according to a transcript .

“I believe they will be an important part of the future of our industry. But it's too early to try to understand how this will work.”

Wilson highlighted EA's success with its Ultimate Team modes in games like FIFA and Madden, where players collect digital and internal trading cards that can be quite valuable. With that in mind, Wilson stated that he "[feels] good about our position on this."

However, Ultimate Team collectibles are locked to each individual game and cannot exit the internal FIFA or Madden ecosystem respectively.

In games like Axie Infinity and The Sandbox, items are represented as NFT collectibles that can be freely resold or traded and possibly migrated to other games or spaces as part of the evolutionary and future metaverse .

It's a big difference and not every major player in the traditional gaming industry seems to be open to such a change.

Steam, the leading digital gaming marketplace for the PC, recently banned developers from publishing games that use blockchain technology or are linked to NFT or cryptocurrencies.

Crypto and digital rights advocates are pushing against the decision, and Steam creator Valve has yet to explain the change.

Wilson didn't delve too deeply into how EA might host NFT game elements or a “play-to-earn” model like the Axie Infinity that rewards players with crypto tokens.

However, he suggested that the asset governance element of crypto games could create deeper interaction for players.

“I believe that anything that brings more people together and engages them for longer, in the context of the entertainment it would create, can be a good thing over time,” he explained. "I believe it is the very foundation of our online services."

Ubisoft, creator of games such as Assassin's Creed and Far Cry, has launched some small, experimental projects related to NFTs in the past and has supported several teams and projects in the industry.

Ubisoft recently made its first investment in the industry, supporting Animoca Brands, creators of The Sandbox, in its latest round of $65 million in funding.

In October, Yat Siu, founder and CEO of Animoca Brands, told Decrypt that the company will work with Ubisoft on NFT-based games.

During a earnings conference last week, Ubisoft's leadership stated, noting that it is, yes, working on projects based on NFTs. Yves Guillemot, CEO of Ubisoft, that the creator wants “to be one of the main players” in the sector.

Bill wants wages to be paid in bitcoin in Brazil

Federal Deputy Luizão Goulart (Republicanos/PR) presented this Friday (5) to the Board of Directors of the Chamber of Deputies a bill that provides for the possibility that part of the salaries of Brazilian workers be paid in cryptocurrencies. According to the provisions of PL 3908/2022, private sector workers may opt for this type of payment […]

The post Bill wants wages to be paid in bitcoin in Brazil first appeared in Portal do Bitcoin . 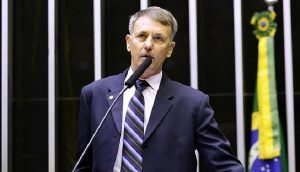