The number of cryptocurrency ATMs worldwide grew exponentially in 2022, with more than 20,000 new ones…

The Content More than 20,000 cryptocurrency ATMs installed in 2022 first appeared in Cointimes.

The number of cryptocurrency ATMs worldwide grew exponentially in 2022, with more than 20,000 new installations made since last December.

This is more than the total of all crypto ATMs put into service in the previous seven years.

ATMs that offer users options to buy and sell cryptocurrencies for fiat currency are increasing at an unprecedented rate.

Data compiled by Coin ATM Radar show that their number at the end of 2022 is approaching 34,000.

In a year when the crypto market reached historic levels , more than 20,000 new devices emerged globally.

According to the installation growth chart updated by the tracking site, bitcoin ATMs were less than 13,000 in December 2020 – that is, all registered ATMs since October 2013 – while 12 months later they exceed 33,900. An increase of almost 200%.

ATMs can be found in almost every corner of the planet, but their spread is still very concentrated.

About 30,000 of all BATMs (bitcoin ATMs), approximately 90% of the gross amount, are operating in the US. Its northern neighbor Canada is a distant second, with just over 2,200 machines.

El Salvador, which accepts Bitcoin , is already among the leaders with its 205 machines, surpassing EU countries like Spain, which has less than 200, and Austria, with 142.

As of Dec. 29, all of Europe had just 1,384 cryptocurrency ATMs, trailing major North American markets.

Several companies now manufacture ATMs that support cryptocurrencies. The biggest players in the market are Genesis Coin with almost 14,000 devices, General Bytes with over 7,500 and Bitaccess with around 5,000 . Coinsource and Bitstop , with less than 2,000 each , complete the top five.

At least 6,000 companies maintain cryptocurrency ATMs in different parts of the world, with the top 10 operators accounting for 70% of them all.

The biggest companies in the sector are Bitcoin Depot , which holds a fifth of the market with more than 6,600 machines , followed by Coincloud ( more than 4,600 ) and Coinflip ( almost 3,500 ).

ATMs support multiple cryptocurrencies and are one-way or two-way devices. The latter gives users the ability not only to buy but also to sell their digital coins.

Most BATMs offer an opportunity to buy bitcoin (BTC) , and many offer other major currencies such as bitcoin cash (BCH) , ether (ETH) , litecoin (LTC) and nano (XNO) .

Also according to CoinATMRadar , Brazil has 22 ATMs belonging to the Coincloud company, the only one with information available in the Bitcoin ATM explorer.

CoinCloud claims on its website that more than 40 cryptocurrencies are accepted at its ATMs, but does not specify which ones they are.

The number of cryptocurrency ATMs can be an important metric to assess the adoption and acceptance of digital assets in the world, being a physical point of access and direct contact with the market.

Following the evolution and its growth can indicate a lot about the growth of the market itself and the existing demand.

Considering that most Bitcoin HODLers arrived on the market this year , it is not surprising that there has been an increase of more than 200% in the offer of ATMs.

The Content More than 20,000 cryptocurrency ATMs installed in 2022 first appeared in Cointimes.

The number of Ethereum addresses with a balance greater than zero hit a new all-time high, just as it did around this same time last year. There are now 71,364,788 addresses that hold some amount of the second-largest cryptocurrency by market capitalization, according to on-chain data from Glassnode. On December 30, 2020, this […]

The post Number of Ethereum addresses with balance greater than zero reaches record 70 million first appeared in Portal do Bitcoin . 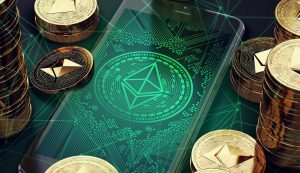