Rapper Matuê confirmed the release of the song Vampiro on NFT that will be sold on-chain. Matuê seems to be enthusiastic about the non-fungible token market and could even own a CryptoRasta

Vampire Music on NFT for fans

Matheus Brasileiro Aguiar, better known as Matuê, is a Brazilian rapper, singer and songwriter. He became known with the single “Anos Luz”, released in 2017 and is considered a symbol of Brazilian trap. poor sound quality on the streaming service on which it would be released; according to Matuê himself, who even claimed to have lost money with the cancellation, aiming at a better quality for the public. public. 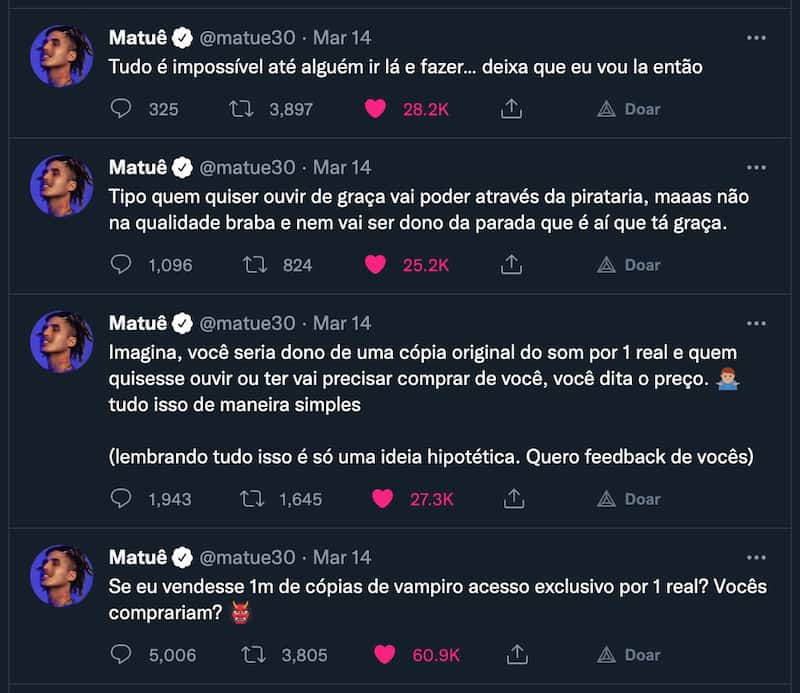 Even under some criticism, the rapper confirmed the release of Música Vampiro on NFT, with a total of 1 million units of the digital asset being sold for R$1.00 each and buyers will be able to say that they own a small part of the single, with scarce and limited quantity. He recognizes that anyone who wants to listen for free can still consume the pirated version, but warns that the production focused on quality and the final result; that would be harmed through piracy, in the same way as happened with the streaming platform. In subsequent tweets Matuê also defended that our way of music consumption is changing and that he believes he is leading this revolution by using non-fungible tokens (NFT) technology to achieve better sound quality.

Within the 1,000,000 vampire units you will be able to buy as many as you want. I’m coming up with several benefits for this community (whoever owns it), exclusive benefits related to Shows, Merch and Launches.— Matuê (@matue30) March 18, 2022

Owners must also get exclusive benefits by participating in an exclusive community. A strategy widely used by existing NFT collections such as CryptoRasta.

CryptoRasta is a Brazilian collection of NFT in tribute to Rastafarian culture. The “Rasta” culture originated in Jamaica and has great names of enthusiasts around the world, such as reggae singer Bob Marley and American rapper Snoop Dogg, who owns some tokens from the CryptoRasta collection. .One of Snoop Dogg’s tokens is the representation of the singer Dada Yute, one of the greatest figures in world reggae. Dada recently released the first rap clip to feature an NFT, “Aquarela Luz”, which features Matuê and Rael. “I turned into a personalized NFT, which was bought by a great world personality, we also had the first insertion of NFT in a music video, Aquarela Luz.” – said Dada. At the end of the video for the song “Aquarela Luz”, Matuê appears making a call to Dada and saying: “(…) Hey, my CryptoRasta (…)”. This shows that the singer of the song “vampiro” is possibly already inserted in the active communities and could even be one of the anonymous owners of some CryptoRasta, which today has 3.6k owners within 10k tokens. What do you think? The way of consumption is changing and music on NFT will be part of our daily lives, revolutionizing the industry in the same way as streaming platforms in the past? Comment on social media Thegarret.| Telegram | twitter | Facebook | Instagram |Read more:Buy Bitcoin on Coinext
Buy Bitcoin and other cryptocurrencies on the safest exchange in Brazil. Register and see how simple it is, visit: https://coinext.com.br

Sat Mar 19 , 2022
Global macroeconomic conditions and geopolitical uncertainty have forced financial experts to make predictions about what comes next. BitMEX CEO Arthur Hayes recently wrote a detailed article explaining how the dynamics of global finance and monetary systems are changing. Hayes explains the role of limited assets like Bitcoin and gold during […] 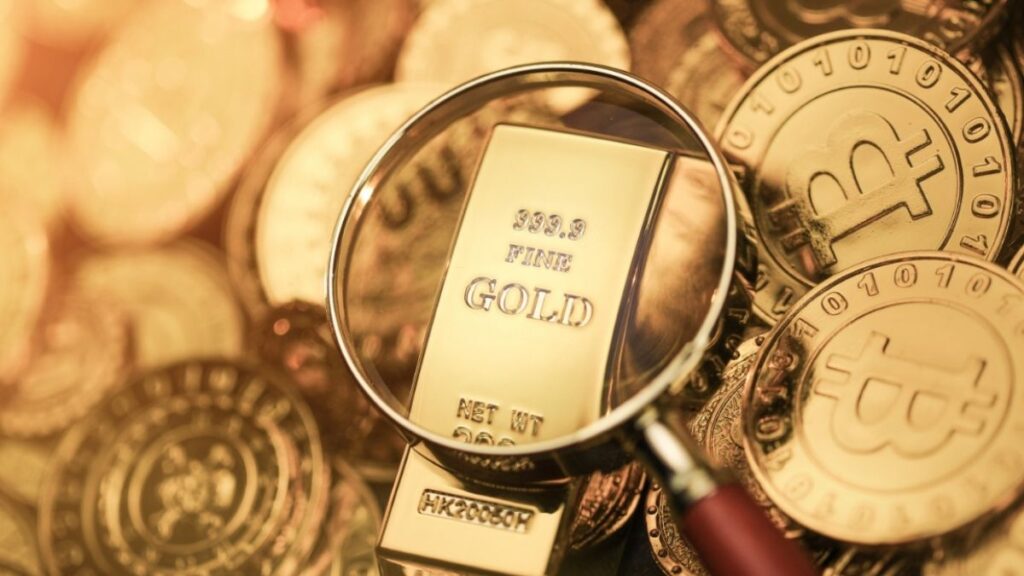