You may have heard of staking, but perhaps you have not understood what this type of investment means. Here we will explain exactly what staking is and how you can get interesting returns by investing in blockchain projects through the Nox app.

Staking is a verb borrowed from English that would literally mean “staking” (from a stake, even, that piece of wood or metal with a point, normally used to support/encircle trees). So in a literal interpretation, staking would be the act of placing stakes to support the growth of something. It makes sense to think about it this way, and you’ll understand why, but the concept used in crypto actually comes from the financial market and bookmakers; where investors or gamblers put money “at risk” – or, in the original translation: “at stake”. The investor or gambler who puts money “at stake” (at risk) is a “stakeholder” (one who assumes the risk) on an investment or bet. he does [staking] in the expectation of obtaining a financial return greater than the risk assumed.

In crypto, there are some blockchain projects that use Proof of Stake to validate transactions carried out on the network, in the same way that miners of Bitcoin – or other Proof of Work networks – use ASICs or video cards to generate computational work that creates blocks, also validating transactions. It’s a different way to achieve a similar result and it works very well for these blockchains. To participate in the Proof of Stake, the “stakeholder” does not need to buy expensive machines and spend energy, but only staking the assets they have in their portfolio, proving to the network that they are interested in that project and are willing to “put something in risk”. A term often used is “skin in the game”, which means that the investor puts his “own skin” at stake, demonstrating how much he believes in the project. Just as mining can yield profit for miners by creating new coins, in a controlled inflation system, staking allows investors to receive a proportionate share of the “at stake” money invested in that network. The more investors put “skin in the game”, the lower the net income for the other participants, as the rewards are diluted among all stakeholders, but don’t think that this is a negative thing! More people staking means greater decentralization and distribution of votes across the network, which helps with security. If the network becomes more secure, it also becomes more valuable in the eyes of the market – which can influence the price increase in the long term, benefiting all investors. Unlike the staking of many exchanges and other service providers, your coins are not locked when you stake with Nox Bitcoin. In this way, the client remains free to move their funds with full liquidity at any time, while receiving the proportional returns.

Did it seem complicated?

For newcomers and even for some more experienced investors in the cryptocurrency market all this dynamic can really seem complicated and that is why Nox Bitcoin decided to meet this great demand related to staking. In the Nox app, it is possible to buy assets from Proof of Stake networks and become a “stakeholder” in a few taps on the smartphone screen. With an automatic staking tool, if the blockchain of the token you are investing allows for this option, your wallet will receive returns proportional to the current balance. For example, in the network Ethereum, your ETH in your wallet yields around 4.9% per annum with staking. Other tokens that also offer annual staking yields (and approximate amounts, which depend on how often new coins are issued in each of them):
Solana (SOL): 5.8% paAvalanche (AVAX): 9.4% papolkadot (DOT): 13.9% pa LooksRare (LOOK): 49.64% pa What are you waiting for? The best way to learn is to experiment. Download the Nox Bitcoin app, deposit BRL, buy your assets from a Proof of Stake network and start staking and automatically receiving returns on what you have invested right now.

Sat Jul 16 , 2022
You can now buy crypto from the PrimeXBT app! For this reason PrimeXBT presents a raffle in which you can win a part of the total prize of $ 5,000 in USDT directly to your account. To participate you must complete some requirements that will make you part of a […] 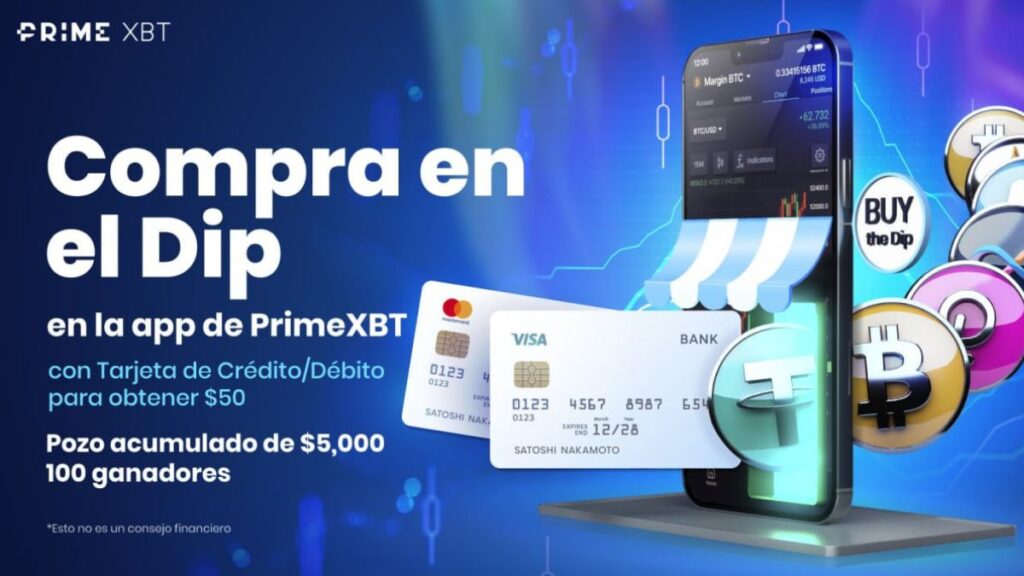