Geopolitical scenario is leading investors to reduce risk exposureCardano (ADA) could reach US$ 1 billion in TVL by the end of the year This Friday (04) almost US$ 100 billion evaporated from the cryptocurrency markets in one day, with bitcoin (BTC) falling below $42,000 and ether (ETH) falling more than 5%, according to Coingolive. Locked (TVL – Total Value Locked). Furthermore, according to an expert, the worsening situation in Ukraine is prompting global investors to reduce risk exposure ahead of the weekend.

On Monday (28), bitcoin hit $45,000 after the US and most other western nations said they would not be directly involved in the war between Russia and Ukraine. After that, BTC briefly rose above the line. mentioned above and recorded a new 3-week high. However, it failed to conquer this level decisively when the bears came back into the picture. As of now, the asset has regained some ground and is above this level, but on a daily scale the asset is still dropping around -3.83% . Its capitalization, which topped $850 billion a few days ago, has dropped below $800 billion. Also read historical news: Lugano, Switzerland follows El Salvador and adopts Bitcoin as official currency.Focusing on on-chain analysis, the SOPR metric can show us the behavior of long-term investors. As we can see in the chart below, the indicator is re-testing the lower zones, showing the current low selling interest (despite the spike caused by the coins from the Bitfinex hack). 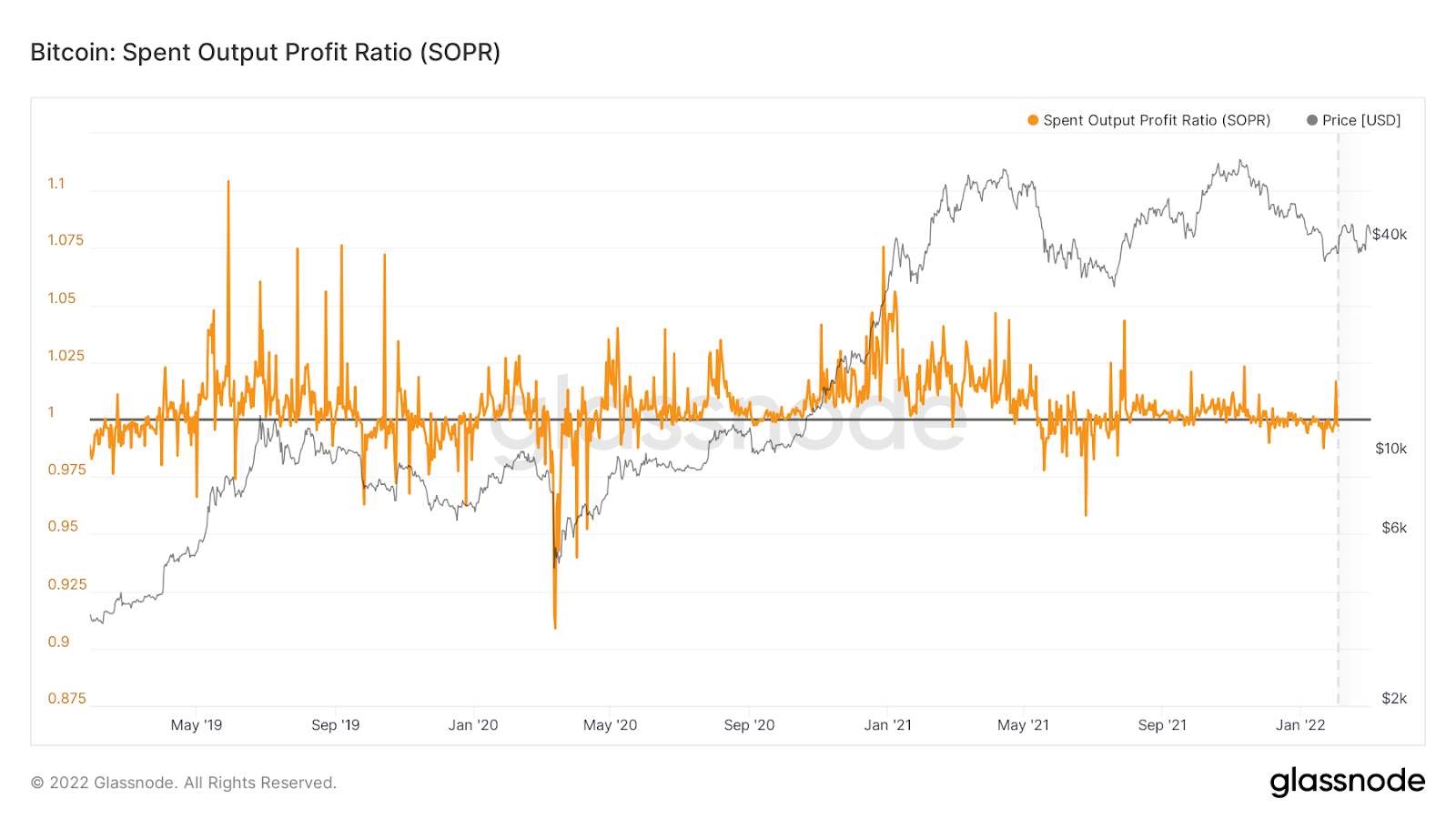 According to on-chain analysis, the SOPR indicator shows when investors are selling their coins for profit or loss. but in the medium-long term the outlook becomes more optimistic if one considers growing retail demand in the future.

US stock futures and global stock indices fell as concerns grew over Russia’s intensifying military campaign in Ukraine. Futures pegged to the Dow Jones Industrial Average, S&P 500 and Nasdaq-100 all fell by 0.7 % and 0.8%, pointing to declines for US indices in Friday’s session. In Europe, the pan-continental Stoxx Europe 600 dropped 2.4%. The Ibovespa closed with a slight drop of 0.01%, at 115,165 points, after oscillating between 115,009 and 115,947. The dollar once again ignored tensions between Ukraine and Russia and closed down 1.55% at R$5.02, fueled by the intense flow of foreign capital to B3 and fixed income. The appreciation of commodities increases inflationary pressure, which should force the Copom to raise the Selic to 13% by the end of the year. First-month Brent crude futures, the global benchmark, rose 0.1% to $110.61 a barrel. 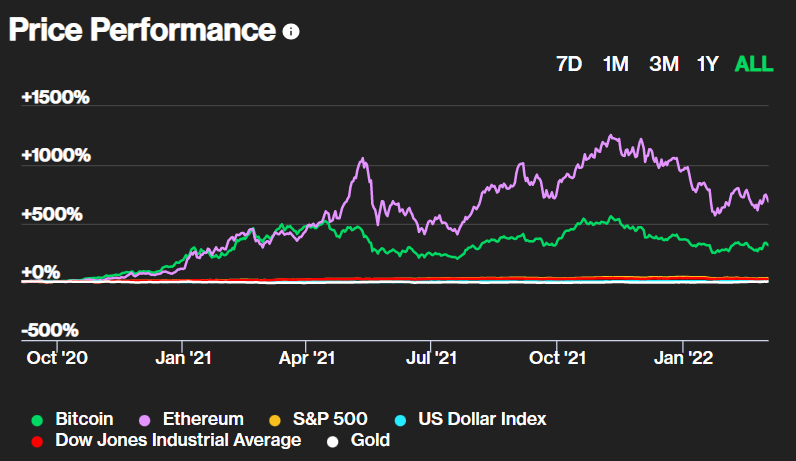 Price performance of BTC, ETH, S&P500, Dollar Index, Dow Jones and Gold – Source: CoindeskUkrainian officials said Russian bombing caused a fire at a nuclear power plant, heightening fears over Moscow’s tactics and disaster concerns However, officials said the fire did not affect critical equipment, allaying concerns about damage to the reactor. As of early Friday, the factory’s administrative building was under the control of Russian forces. Consequently, many analysts are trying to gauge how much the conflict and tough Western sanctions on Russia will hurt global economic growth and further increase inflation as stop the supply of commodities.According to the wealth management strategist at Everbright Securities International in Hong Kong, Kenny Wen, the worsening situation in Ukraine is prompting investors to reduce risk exposure ahead of the weekend. Wen said investors are “concerned about inflation and worried about the global economy.” He added: “If oil prices rise significantly, as they did in the 1970s, the global economy could go into recession, which will hurt corporate profits.. So the impact will be lasting.”

Cardano could reach $1 billion in TVL

According to DeFillama, a DeFi TVL aggregator, Cardano’s total blocked value has surpassed its previous high of $130 million last month. At the time of writing this article, the proof-of-stake blockchain live TVL was around $132.52 million. When staking governance tokens are included in the TVL valuation, DeFillama’s panel reveals Cardano’s TVL is much higher it’s around $215.55 million. Cardano is logging over $200 million in TVL with six DeFi protocols already running on the Cardano blockchain. This highlights the potential to reach the US$ 1 billion mark by the end of the year, as several projects such as Ardana, Aada, Liqwid, Djed and Cardano Maladex are expected to be launched.

2/Only 6 months ago people were saying Cardano would never have DeFi. Now we have 6 protocols at >$200m TVL, many more on the wayLike we have seen with others (like Terra), TVL growth tends to go parabolic after a slow start. We could easily see billions by end of year pic.twitter.com/g27fKDkYeo— ADA whale (@cardano_whale) March 3, 2022

Other positive signs, such as the increase in the number of active wallets on the Cardano blockchain network, support the rising trend of TVL. The number of wallets with Cardano’s ADA coin passed the three million mark in February. Nearly 500 projects are being developed on the Cardano blockchain, with DEXes representing 6.1% of this total.Read too: What is TVL and how to use it to find good projects? The result of the main altcoins in the last 24 hours is as follows: Ethereum (-5.26%), Binance Coin (-2.24%)Ripple (-3.28%), Terra (-2.23%), Solana (-6.53%), Cardano (-3.31%), Avalanche (-1.34%)Polkadot (-4.78%), Dogecoin (-3.10%) and Shiba Inu (-1.70%).According to CoinGoLive, the market capitalization of all crypto assets reached around $1.93 trillion as of Friday.
Follow the Crypto Market News on the Networks | Telegram | twitter | Facebook | Instagram | from Cointimes and have a great trading day.Buy Bitcoin on Coinext
Buy Bitcoin and other cryptocurrencies on the safest exchange in Brazil. Register and see how simple it is, visit: https://coinext.com.br

Bitcoin Falls With US Stocks as Nuclear Threat Understands Markets 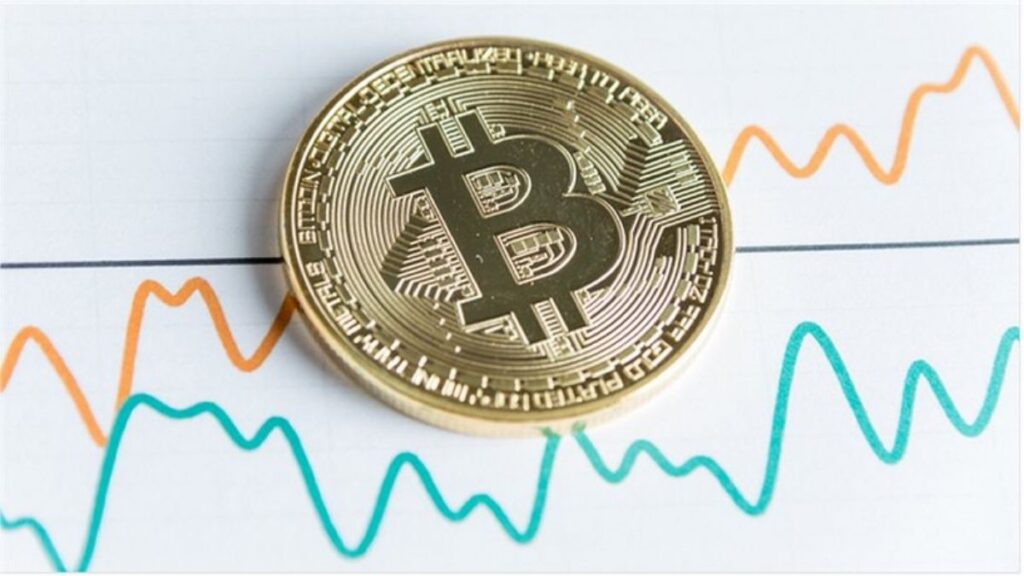