“Fight for Ethereum” is the tagline for Illuvium, the new play-to-earn game created by the same developers as the DeFi Synthetix protocol, slated for release later this year. In the blockchain game, players will gain ether while battling in the virtual world with Illuvials, mystical creatures with special powers. The project draws inspiration from Pokémon and allows characters to capture pets in the form of non-fungible tokens (NFT) to use in battles or trade them outside of the game. Unlike Axie Infinity, which requires a player to have at least three NFTs to start playing, Illuvium has no entry cost and allows the gamer to collect Illuvials while exploring the world. Iluvium has been developed since late 2020 by Kieran and Aaron Warwick — brothers of Kain Warwick, the founder of Synthetix (SNX), a synthetic derivatives platform that allows different types of assets to be traded in a decentralized environment. The project has a Brazilian on the team, 21-year-old Pedro Bergamini, who works as a senior developer of Solidity — the language used to write smart contracts based on Ethereum. Your job is to bridge the gap between the game and the financial ecosystem on the blockchain. In conversation with the Bitcoin Portal, he said that he has been programming since he was 13 years old. At that time, he took a course in game programming, a hobby he has cultivated since he was a child. When he dropped out of high school in 2018, he focused on learning about blockchain technology, especially Ethereum. In the meantime, he collaborated on open source projects and did some freelance work. Until late last year, he participated in a Consensy bootcamp, where he was invited to join the Illuvium project. “When I was taking the Consensys course, I met several developers and one of them worked at Synthetix. We ended up getting closer and he commented on Illuvium, which at that time was just beginning. I think I was the third to join the project, it was at the very beginning”, he explained. Since then, he has worked from his home in Florianópolis (SC), keeping in touch with the Australian team at Illuvium, which is running out of time to launch the beta version of the game in the coming months. “The cool thing about blockchain is that it's a global, borderless community. If you know English and are interested in the area, projects are open. It doesn't really matter who you are and where you live, but what you produce and add to the community”, he said. In Pedro's view, Illuvium's differential is that it will be a triple AAA game that should draw the attention of the general gaming public rather than being limited to the blockchain industry. “Players will be there for the game itself and for fun rather than its economy, and I think that will take the play-to-earn model to another level. I'm curious to see how it goes,” he says.

How will Illuvium be

The game will have more than 100 different Illuvials that connect with one of the five elements: water, fire, earth, air and nature. They have three levels of evolution, the first level being the most common to find — in better regions of the map, the player will be able to find more advanced characters. Over time, Illuvials will become more difficult to capture, as their apparition rate is tied to the number that has already been found. Hunting Illuvials will be one of the player's revenue streams, as he will be able to improve the characters and sell them on the IlluviDEX exchange, the official marketplace. While playing, the user will also be able to extract minerals from the planet's surface and turn them into useful items that can also be sold on the market.

A second source of player revenue will be player vs player auto chest style battles, where players use their Illuvial collection to battle each other. The user can engage in battles in three different ways: battling other random players in the ranked arena, battling friends in the Leviathan arena, and finally watching the fights and betting on the results. According to Bergamini, the economics that will determine how much ether will be distributed to users in the battle is still being studied. Regarding the problem of Ethereum fees, the game uses the second-tier solution Immutable X, a parallel network that allows the user to trade their NFTs without paying gas fees.

The game's governance token, the Illuvium (ILV), is now available on the market. This Thursday (2), the cryptocurrency is worth US$ 550, according to CoinMarketCap, a price 660% higher than the US$ 72 in March this year, the month of the debut of the asset. The token is important because it gives holders the power to vote on issues related to the game's economy and resources. “With the launch of the game, governance will be much more oriented towards the game's mechanisms. Illuvium's idea is to apply the concept of a decentralized studio, so we want to give all the controlling power to the community,” explained Bergamini. All fees that arise from in-game purchases — for rebirth, travel, and upgrades — are sent directly to Illuvium's treasury and redistributed to the community through the ILV staking autonomous organization (DAO). The program, however, will be separate from the game, as highlighted by Bergamini. “DAO and the game itself are separate things. Of course, many early players have ILV and may be staking, but in the future with the game going mainstream, anyone will be able to play without worrying about DAO. You can also just staking, without getting involved with the game”. He explained that Illuvium is still under development and new features may appear in the future, such as Fuel, the new utility token that should be released soon with the arrival of Illuvium Zero, the minigame that will precede the beta version.

Sat Sep 4 , 2021
Published: 7 May 2022, 10:18 Updated: 21 May 2022, 11:58Handelsbanken, Volvo Cars and other successful large companies revealed their recipes for success during a livestreamed event. "90 fast-paced minutes." Today we work anywhere, we lead at a distance, develop together and collaborate across borders and time zones. What does it […] 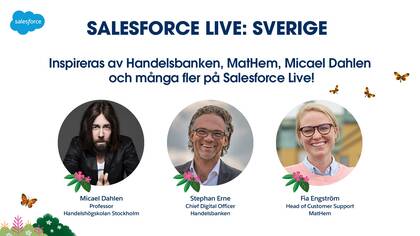