After the London update introduced a token-burning mechanism in Ethereum (ETH), the network is already burning 3.68 ETH (US$10,295) every minute, on average. Among other improvements, Ethereum Enhancement Proposal (EIP) 1559 caused a portion of all transaction fees, called the base fee, to now be destroyed on each block – instead of going to the miners. As per the proposal description, this was done to offset Ethereum inflation, while still giving the block reward and priority rate (the maximum rate users are willing to spend to include their transaction in a block) to the miners. About 3.7 ETH, just over $10,000 at current prices, were being burned on Ethereum every minute, according to Etherchain.org. Meanwhile, 630 ETH (about $1.77 million) were burned within hours of the update being deployed. The base rate fluctuated between 70 Gwei (US$5.84) and 100 Gwei (US$8.34) in the last hour. Currently, the popular non-fungible tokens (NFT) market, OpenSea, is the biggest “ETH burner” as more than 69 ETH ($193,124) have been destroyed thanks to facilitated transactions since the update, data from Ultrasound show. money. OpenSea is followed by two iterations of the Uniswap Decentralized Finance (DeFi) trading protocol — Uniswap V2 (53.33 ETH) and Uniswap V3 (45.25). So far, experts and community members are showing a positive feeling about the upgrade. “The long-awaited upgrade of the EIP1559 network was great for the Ethereum cryptocurrency ecosystem. Now, every transaction, purchase of NFT or loan on the Ethereum network will result in the extinction of ETH, making ETH a less inflationary asset,” noted Ross Middleton, deversiFi's CFO in a conversation with Decrypt. Middleton compared ETH's new engine to traditional stocks, explaining that it's the equivalent of "Apple Inc burning AAPL stock every time someone bought something from Apple's App Store or made an in-app purchase." The price of ETH itself, however, has not been much affected so far. According to the CoinGecko platform, the token is trading for around $2,800, an increase of 4.9% in the last 24 hours.

How many zeros does Venezuela need to cut in its currency before creating a digital one?

Sat Aug 7 , 2021
A 2.4kg chicken beside 14,600,000 bolivars – Reuters/C. G. Rawlins.The Central Bank of Venezuela (BCV) announced yesterday the third currency conversion in just over a decade. In other words, from October 1st, six zeros from the national currency will be eliminated and the digital bolivar will also circulate across the […] 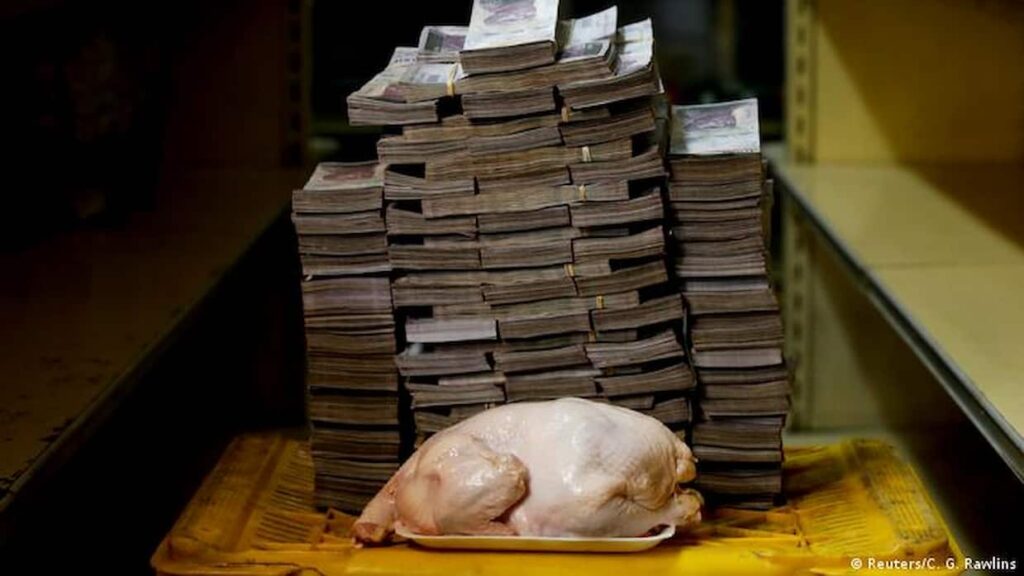