The turmoil caused by the debt of crypto companies and the determination of central banks to raise interest rates dominate the attention of investors this Thursday (30). Bitcoin (BTC) is down 4.9% at $19,071.05, according to CoinGecko data. Ethereum (ETH) is trading at $1,024.52, down 9.5%. In Brazil, Bitcoin is now worth R$99,906.65, with a 5.9% devaluation in the last 24 hours, according to the Bitcoin Portal Index (IPB). Altcoins also trade in the red as Binance Coin (-3.5%), XRP (-3.2%), Cardano (-3.6%), Solana (-9.2%), Dogecoin (-4.2 %), Polkadot (-5%), Shiba Inu (-1.6%) and Avalanche (-8.5%). “The news cycle has been pretty bad for crypto markets,” Oanda senior analyst Edward Moya said in an email to CoinDesk. For him, investors are increasingly concerned about the risk of contagion with the collapse of the Three Arrows Capital crypto fund. The $20,000 support for the Bitcoin price has been closely watched by investors. Despite the current sell-off caused by the crisis faced by some companies in the crypto industry and a challenging macro scenario, analysts at Deutsch Bank believe that BTC could rise to $28,000 by the end of the year, given the cryptocurrency’s close correlation with the index. S&P 500. That jump would represent a 32% gain from current levels, but less than half of last November’s high. However, the bank also warns of further losses due to the complexity of the crypto system.

Dan Morehead, CEO of crypto hedge fund Pantera Capital, says the Fed was wrong to keep rates too low and “manipulate the bond market,” and that misguided policy now reverberates in crypto. In a note, the former Goldman Sachs fixed income trader said that the reversal of that policy will be “painful”. The executive predicts the meltdown of more crypto projects in the next two months due to the problems caused by highly leveraged companies like the Terra system, the Celsius lending platform and Three Arrows Capital. Incidentally, the fund, also known as 3AC, is now considering its options following the liquidation order issued by a court in the British Virgin Islands, according to the Wall Street Journal. 3AC creditors will be able to file their claims online, though the process could be lengthy, said people involved in liquidating the assets. Sources have revealed to CoinDesk that crypto market maker and lending platform Genesis Trading could suffer losses of “hundreds of millions” of dollars from exposure to 3AC fund and Babel Finance, another credit protocol. Meanwhile, MicroStrategy decided to dismiss rumors that it might have to liquidate its Bitcoin holdings due to the price drop and further increased its exposure to the asset with a new purchase of $10 million in BTC.

Documents revealed by The Wall Street Journal on Wednesday (29) show that Celsius – already in the third week of blocking customer withdrawals – had in 2021 twice the leverage of traditional US banks, which increased the risk of the business. . Celsius projected to attract more than $108 billion in deposits in 2023 and forecast revenue of $6.6 billion for the same year. Amid the collapse of several companies, JPMorgan has an optimistic outlook. In a report, strategists assess that the current phase of deleveraging in the sector is at an advanced stage and should not last long.

Global monetary authorities gathered at the European Central Bank’s annual forum in Sintra, Portugal, warned of a longer-lasting inflationary shock. In a panel hosted by Bloomberg, Federal Reserve Chair Jerome Powell, ECB Chair Christine Lagarde and Bank of England Chair Andrew Bailey said a new world with the reversal of globalization may require a tighter monetary policy bias. Powell also highlighted that the Fed has tools to avoid a US recession, but that the task is increasingly difficult. Financial market forecasts for the direction of US interest rates, he said, are “well in line” with Fed projections. In an interview with CNBC, Loretta Mester, chairman of the Cleveland Fed, said her goal is for interest rates to rise to 3% to 3.5% in 2022 “and just above 4% next year” to combat inflation, even at the risk of causing a recession. That need to raise rates at a rapid pace has shaken markets this year, and global equity indices could end the quarter with their worst performance since the three months ending in March 2020.

Exchange FTX would have plans to buy control crypto lending platform BlockFi, sources told The Block. With the $250 million line of credit granted by FTX, this would entitle him to a 50% stake in BlockFi. The rest would be purchased for $25 million. FTX does not comment.

Coinbase Global bets on expansion in other countries after laying off more than 1,000 people in the US. Nana Murugesan, vice president of business development and international at the American crypto exchange, told Bloomberg that the company’s current focus is on Europe, with registrations underway in Italy, Spain, France and the Netherlands.

And Coinbase’s Cryptocurrency Analytics Program, Coinbase Tracer, will provide the U.S. Immigration and Customs Enforcement (ICE) with information about cryptocurrency users, including “historical geo-tracking data” and transaction history, according to a contract obtained by watchdog group Tech Inquiry. A spokesperson for the exchange told CoinDesk that the data provided is available online and does not include personal information.

The MB Tokens, a company in the Bitcoin Market ecosystem, launched another offering of digital fixed income tokens backed by the transfer of financial flows. MBFP09 has an estimated yield of 18% per year, with settlement expected in October 2022.

Still in the tokenization market, the manager Iguana Investimentos created a traditional credit rights fund that transfers part of the financial flows of receivables, according to Valor. The payments relate to receipts from a wholesaler in the consumer sector, but the name has not been released.

uShark, a decentralized crypto crowdfunding platformselects from September up to 50 early-stage startups for angel and seed capital investment, Valor reported.

European Union (EU) negotiators reached a consensus on rules for transactions in the cryptocurrency market on Wednesday (29), CoinDesk reported. Customers will need to be identified even for small-value cryptocurrency transfers – if they are carried out between two regulated providers – but most payments to private wallets will not have anti-money laundering controls.

The new rules for unhosted wallets will only apply to transfers to a person’s own wallet and amounts above 1,000 euros. This Thursday (30), the European Parliament, the Council and the European Commission meet for a final round of discussions on the bloc’s crypto regulatory framework, known by the acronym MiCA.

The US Securities and Exchange Commission rejected Grayscale’s proposal to convert its flagship product, the Bitcoin Trust (GBTC), into a spot Bitcoin index fund (ETF). The SEC justified the measure with the prevention of “manipulative and fraudulent” practices. The crypto asset manager filed a lawsuit against the agency following the ruling.

The São Paulo Court of Justice (TJ-SP) suspended a lower court decision that forced Capitual to continue providing services to Binance, under penalty of a fine of BRL 10,000 per day. The process runs in secrecy of Justice, but the decision of the court was published in the Official Gazette on 22 of June.

The Lazarus hacking group, linked to the North Korean government, could be responsible for the attack that resulted in the theft of $100 million worth of cryptocurrencies from the Horizon parallel blockchain, linked to the Harmony protocol, according to data from blockchain analysis firm Elliptic. Coincub research says that the communist country has an army of 7,000 cyber criminals in the service of the state, which uses cryptocurrencies as a source of income.

Phishing Alert: an employee of Customer.io, an online newsletter and campaign management platform, leaked the OpenSea non-fungible token marketplace customer list to a third party. The leaked information included email addresses, according to a blog note, and raises the risk of phishing.

The Paxful cryptocurrency marketplace launched a project in Brazil to provide financial education to the black population. Called AfroBit_lab, the program will offer 12 places and those selected will receive an incentive of R$ 1,300. Registration will be open from this Friday (1st) through an online form.

Brazilian national team forward Richarlison has entered the non-fungible token market with its own line of collectibles created by the International Digital Group (IDG), according to the newspaper O Globo. The launch will be in different stages, with varying availability and prices. Two more collections are still planned, in the “Special” and “Rare” categories.

Still in the world of football, Sorare and Kylian Mbappé have struck a deal that makes the French player an ambassador and investor in the NFTs-based fantasy sports platform, according to the Financial Times. Sorare has over two million global users and partnerships with LaLiga, Bundesliga and Major League Baseball (MLB).

Napster, a brand that has become synonymous with free music for a generation of consumers, plans to rebuild its business around crypto assets and non-fungible tokens, even as demand for these assets declines, according to a Bloomberg report.

Faced with the advancement of the virtual universe, the Brazilian Association of Publicly-Held Companies seeks a way for Brazilian companies to hold shareholders’ meetings in the metaverse, according to Valor.

How to Buy Bitcoin Using a Credit Card, PayPal, Or a Wire Transfer

Thu Jun 30 , 2022
If you want to purchase bitcoin without having to give your real name, there are two options: Cash and an escrow service. You can also use your credit card or PayPal account to make the transaction. But if you want to buy bitcoin anonymously, you’ll need to avoid the former […] 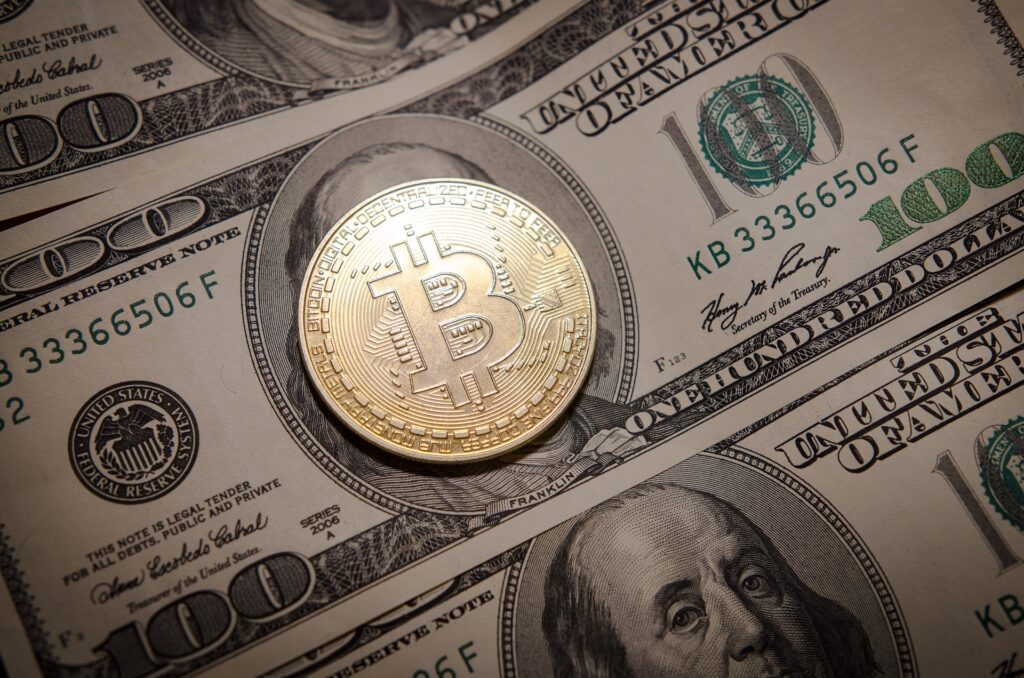