The cryptocurrency market starts the week strongly in the negative, still marked by uncertainties in the macro scenario. Bitcoin (BTC) is down 2.4% in the last 24 hours, trading at $41,542, data from CoinGecko shows. Ethereum (ETH) is down 5% to $3,080. In Brazil, Bitcoin lost 1.5%, quoted at R$ 198,570, according to the Bitcoin Portal Index (IPB). Terra (LUNA) is among the biggest drops in the altcoin field, down 8.5%. Luna Foundation Guard (LFG), the organization behind the TerraUSD algorithmic stablecoin, also part of the Terra blockchain, made several purchases over the weekend, adding $173 million worth of bitcoin to the wallet, CoinDesk reported. Other altcoins are also down like Binance Coin (-3.7%), Solana (-4.3%), XRP (-5.4%), Avalanche (-7.6%), Cardano (-5.1 %), Polkadot (-7.7%) and Shiba Inu (-4.1%), according to data from CoinGecko. CoinDesk analysis points out that lesser interest from speculators may be behind the current market dispersion, highlighted by heightened volatility in altcoins. In seven days, both Bitcoin and Ethereum are down more than 10%, data from CoinGecko shows. The war in Ukraine, the effects of sanctions on prices and the prospect of monetary tightening in the United States continue to be the main themes on investors’ radar. The performance of the stock market is another factor weighing on cryptocurrencies. The 40-day correlation between Bitcoin and the Nasdaq 100 index hit a record high of 0.6945 on Friday, Bloomberg data shows. With this trend, the biggest cryptocurrency could drop to $30,000 by June, according to Arthur Hayes, co-founder of trading platform BitMEX. Joe DiPasquale, CEO of asset manager Bitbull, said in an email to CoinDesk: “We should see a reaction around $37k and $32k, but BTC needs a catalyst to sustain any bullish momentum in the face of macro issues. , such as further increases in interest rates and changes in monetary policy”.

Dogecoin (DOGE) has lost 4.2% in the last 24 hours after Elon Musk’s decision not to become a member of the Twitter board, according to an announcement on Sunday (10) by the platform’s CEO, Parag Agrawal, published by the Wall Street Journal. On Saturday, Tesla CEO Musk had suggested changes to the Twitter Blue subscription model, such as lowering prices, suspending ads and accepting dogecoins to pay for the service. And speaking of Tesla, Blockstream has started construction of a factory that will operate on 100% solar energy for Bitcoin mining in the state of Texas in partnership with electric car manufacturer and Block (formerly Square).

With the popularization of Bitcoin, tattoo parlors, hotels and even bakeries are beginning to accept crypto assets, but demand is still low, according to a report by Folha. For André Horta, CEO of BitcoinToYou, this may be related to the devaluation of the cryptocurrency since November: “If a person buys a bitcoin for almost BRL 370,000 and now sees that it is at BRL 220,000, they will not take this one.” asset you bought so dearly and spend it on an outfit”. BNY Mellon’s Global Chief Growth OfficerAkash Shah, said in an interview with Valor that the bank wants to expand its operations in the domestic market and that, although the sector is still at an early stage, “crypto will be part of people’s investments, in the same way that they invest in commodities or other active”. Binance said it has received provisional approval to operate as a virtual asset exchange in Abu Dhabi, a step towards becoming a regulated crypto services provider in the capital of the United Arab Emirates, CoinDesk reported. And Coinbasewhich recently launched trading operations in India, relied on UPI, a popular payment system in the country, but the service is “temporarily unavailable” on the app, according to the Economic Times.

Brazilian regulators are aware of the transformations that will arise with blockchain technology and cryptocurrencies, said the coordinator of the work on the digital currency of the Central Bank, Fabio Araujo, during the Brazil Conference event, promoted by Harvard University. At the conference, highlighted by Valor, the director of the Bitcoin Market, Fabrício Tota, compared the arrival of blockchain with the mastery of fire. “It’s an allegory that I like to use, because whoever used it first didn’t imagine at that moment that there would be a combustion engine or a steel industry, we’re still almost in the stone age [do blockchain].” The National Congress wants to approve the framework that regulates financial operations with cryptocurrencies in Brazil by June, according to Valor. In a column in E-Investidor, Tota pointed out that the lack of regulation should not be a reason for “global” pseudo-brokers to operate in Brazil without a local presence. In the US, with the aim of the government Before seeking a regulatory model for the cryptocurrency industry, officials have identified stablecoins as an initial target for stricter rules, according to the Wall Street Journal. And in the absence of federal laws, crypto lobbyists and executives have focused on US states to get favorable rules passed, the New York Times notes. On Saturday, the New York Senate passed measures to strengthen the state’s oversight of cryptocurrencies, according to CoinDesk. The European Union has targeted cryptocurrency wallets, banks, currencies and digital asset funds in a new Russian sanctions package announced on Friday, trying to close potential loopholes that could allow Russians to move money abroad, Reuters reported. US military intelligence warns that Russian troops have prepared a major offensive in eastern Ukraine. The chancellor of Austria plans to meet with Russian President Vladimir Putin in Moscow on Monday, reports the New York Times.

Sotheby’s expects to increase its share of the non-fungible token market this year, even considering the hypervolatility of NFTs, which it has hedged against with sales in other new markets and contemporary and modern art, according to Forbes. In addition to opportunities in NFTs and fan tokens, Guilherme Ávila, responsible for the sports area at Investment Banking at XP, believes that the Law of Corporations (SAFs) for Brazilian football teams has created a market to be explored by the financial sector. “Between three and five years I think you will see more than one club on the Stock Exchange,” Ávila told E-Investidor. Bitcoin Market and Goal talked about the present and the future of the union between the real and the virtual world in an article on InfoMoney. Caroline Dalmolin, director of platform partnerships in Latin America for Meta, stressed that the metaverse will not happen “from one day to the next” due to challenges such as the democratization of quality internet. Reinaldo Rabelo, Bitcoin Market CEO believes that blockchain technology raises hopes that the metaverse, with its virtual economy, will be a reality. “Bitcoin and all the crypto-assets that emerged later bring the possibility of having a digital asset that is in fact yours, and without depending on a physical structure to validate your possession,” he said. In an interview with Decrypt, rapper and actor Ice Cube said that “NFTs challenge the media industry” and commented on how technology can shake up the entertainment industry.

More support for greener transport in the spring budget

Mon Apr 11 , 2022
The world’s most efficient in-store cultivation Published: March 29, 2022, 9:00 AM Updated: April 7, 2022, 10:57 AMWith its world-unique innovation, the food tech company Swegreen has taken the cultivation that many thought belonged to the future into the grocery stores. Ica Maxi in Linköping is one of the stores […] 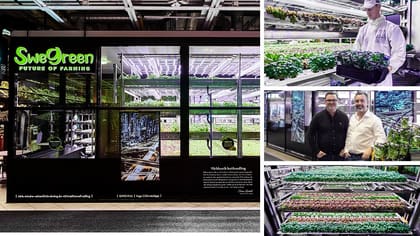