The cryptocurrency market remains in the red this Thursday (7), with strong losses for altcoins such as Solana and Dogecoin. Bitcoin (BTC) is down 3.9% in the last 24 hours, trading at $43,472, data from CoinGecko shows. Ehereum (ETH) is down 3.2% to trade at $3,229. In Brazil, Bitcoin drops 2.8%, to R$ 206,483, according to the Bitcoin Portal Index (IPB). The expectation of higher interest rates in the United States generates caution among investors, who seek assets seen as safer and sell those considered riskier. The correlation between Bitcoin and US stock indices has been rising over the past 90 days, Bloomberg data shows. The Federal Reserve minutes released on Wednesday showed that policymakers had discussed the possibility of raising interest rates by 50 basis points. The prospect of lower liquidity with the end of the pandemic-era stimulus could result in fewer resources being invested in crypto assets. In Asian trading, BTC even dropped as low as $42,760, below the $43,000 mark for the first time since March 24. Also on the radar are sanctions on Russia as an attempt to stop the war. Sberbank, the largest Russian bank, has entered the list of sanctioned companies. In an interview with CoinDesk, Scott Freeman, co-founder and partner at financial services firm JST Capital, said that macro themes reduce risk appetite: “People look for opportunities to sell and profit.” The crypto market has shrunk by around 5%, returning to the $2 trillion range, with nearly $130 billion evaporated in the last 24 hours. On Wednesday, TerraUSD’s bitcoin reserve (UST), the Terra blockchain stablecoin, came closer to Do Kwon, founder of Terraform Labs’ $10 billion goal. He added $230 million worth of bitcoin to the Luna Foundation Guard wallet, which now amounts to 35,767.98 BTC — the equivalent of $1.5 billion. Still, the Terra token (LUNA) does not escape losses and operates down 6.7%. Dogecoin tumbles 5.9% after gains in recent days, boosted by Elon Musk’s investment in Twitter. Other altcoins are down this Thursday (7) such as Binance Coin (-2%), Solana (-6.2%), XRP (-3.9%), Cardano (-5%), Avalanche (-4, 7%), Polkadot (-5.1%) and Shiba Inu (-4.2%), according to data from CoinGecko.

Bitcoin on the Moon and Crypto Bull

Billionaire Michael Novogratz, who is attending Bitcoin 2022, a conference in Miami that focuses on the world’s largest cryptocurrency, said that when the FED takes a break, “Bitcoin will go to the moon.” The CEO of Galaxy Digital Holdings believes the US central bank will keep tightening “for a while” due to accelerating inflation and will likely raise interest rates by 50 basis points soon, according to Bloomberg. The President of El Salvador, Nayib Bukele, canceled participation in the conference. In post on twitter, Bukele cited “unforeseen circumstances” in the country that demand his attention. A highlight at the opening of the event in Miami was the unveiling of a replica of the Wall Street bull. But instead of the classic golden New York statue, the crypto version has “laser-beam eyes”, golden horns and futuristic airs, according to the O Globo agency.

The Brink Foundation announced on Monday (4) the winners of the research grant for developers working on Bitcoin open source. Among them is Brazilian Bruno Garcia, 22, who works as a back-end developer at the Bitcoin Market. Garcia gained notoriety in the Bitcoin community by identifying a point to be corrected in the Taproot code, BTC’s most important update and implemented last November, according to the Bitcoin Portal. the futuristic Amy Webb, founder and CEO of the Future Today Institute, said in an interview with Valor that, among other areas, Brazil could establish itself as a global “hub” for cryptocurrencies and digital payments. According to her, investing in these activities would help “to reduce the existing social gap in the country by democratizing access to services through cell phones”. ProShares filed for SEC registration to launch what would be the first US inverse Bitcoin index fund, according to CoinDesk. In practice, it would be an ETF to bet against the cryptocurrency. ProShares already has an agency-approved Bitcoin futures ETF, which on Wednesday gave the go-ahead for NYSE Arca and Teucrium to launch the same product. Meta Platforms, which owns Facebook, has plans to roll out virtual currencies, tokens and lending services on its apps, according to the Financial Times. The virtual currency “Zuck Bucks”, as it has been called by company employees, would be used in the metaverse. Coinbasethe second largest cryptocurrency exchange by volume, announced the start of trading services in India during an event this Thursday (7) in Bangalore, CoinDesk reported. And Binance.US said on Wednesday it had raised more than $200 million in a seed funding round with a valuation of $4.5 billion, Reuters reported.

The stablecoins are in the sights of regulators in the United States. Republican Senator Patrick Toomey of the Senate Banking Committee on Wednesday introduced the “Stablecoin TRUST Act” bill to specify how different U.S. regulatory agencies should oversee companies that issue cryptocurrencies whose prices are pegged to the dollar or other assets. , reported CoinDesk. Panelists attending the Bitcoin 2022 conference highlighted that uncertainty about how cryptocurrencies will be regulated, particularly in the US, represents the main barrier to greater use of digital assets, according to the Wall Street Journal. The Sky Mavis, the company behind the game Axie Infinity, has raised $150 million in a fund that will be earmarked for compensation for those affected by the March 23 Ronin wallet hack. The round was attended by companies such as Binance, Andreessen Horowitz and Paradigm. A Bloomberg report points out that venture capital investors may have to take the risk of covering losses caused by hackers.

A copy of the first tweet, by Twitter co-founder Jack Dorsey, is up for sale for nearly $48 million on OpenSea, according to Bloomberg. Sina Estavi, CEO of Malaysia-based blockchain service Bridge Oracle, paid $2.9 million for the copy in March 2021. NFTexp, a non-fungible token sales platform, is offering exclusive NFTs for “Detetives do Prédio Azul 3 — Uma Aventura no Fim do Mundo”, a Brazilian feature known as DPA3 produced by Paris Filmes. All profits from this first auction will go to charities, according to a press release. ESPN and Autograph, the Web3 brand co-founded by former football player Tom Brady, announced Wednesday a deal for the sports channel’s first NFT. The collection will be themed around the miniseries “Man in the Arena: Tom Brady,” according to a statement.

Companies and investors must seize the opportunities of the energy challenge

Thu Apr 7 , 2022
Published: April 7, 2022, 1:27 p.m.Fatih Birol is the CEO of the International Energy Agency, IEA. The energy sector accounts for almost three quarters of global greenhouse gas emissions. This means that the world’s climate challenge is basically an energy challenge, which requires major joint efforts. Governments around the world […] 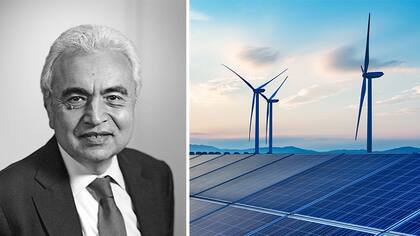