The two main networks in the cryptocurrency market, which have the most capital, were affected by the increase in user activity and some services were harmed this morning.

Bitcoin’s mempool, a temporary database where transactions that are validated by nodes and are waiting to be included in some block by miners, are operating at full capacity. At the time of writing this article, the use of mempool was in 307 MB of the 300 MB available, with 46,884 transactions that paid the minimum fee to enter this temporary digital space, waiting to be confirmed. 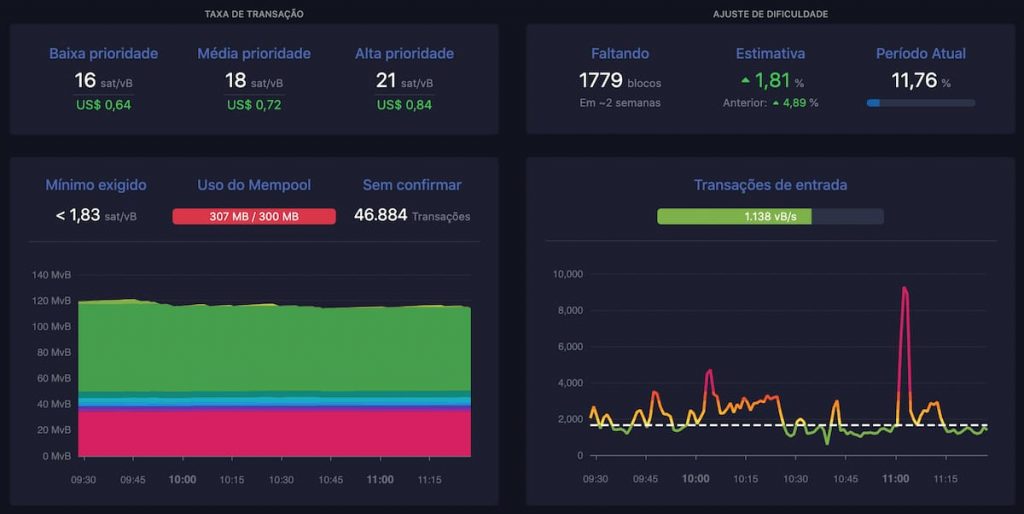 Source: Mempool.space The high demand for space has already started to reflect in the average fees that are being accepted by miners, but it is possible that they will continue to rise throughout the day as demand seems to be very high and thanks to the competitive model where Users are encouraged to increase by how much they are willing to pay so that their transactions get ahead of others.

Many of these more than 40,000 transactions on hold may have their fees changed if the owners of the bitcoins being transferred have greater urgency.

At 11 am on Thursday, May 12, we saw a spike in the minimum fee for entering the mempool, reaching 9.276 vB/s, which is a reflection of an increase in the difficulty for a transaction to be considered valid by the network and has the objective of keeping the use of space within its limit. Network congestion can be quite disruptive for businesses that need to complete transactions or for BTC owners that want to move their units, for whatever reason. From opening or closing a channel on the lightning network, to an urgent sale operation, a need to spend the coins or move part of them to another address, perhaps after a purchase. With increasing minimum difficulty and average rates, all those with few bitcoins in their wallets may find themselves completely blocked from using the network. In addition to the momentary problem, such a large increase in demand can cause a “snowball”, which increases rates exponentially, as we saw in April 2021, with an average value reaching around $60 for a single transaction. 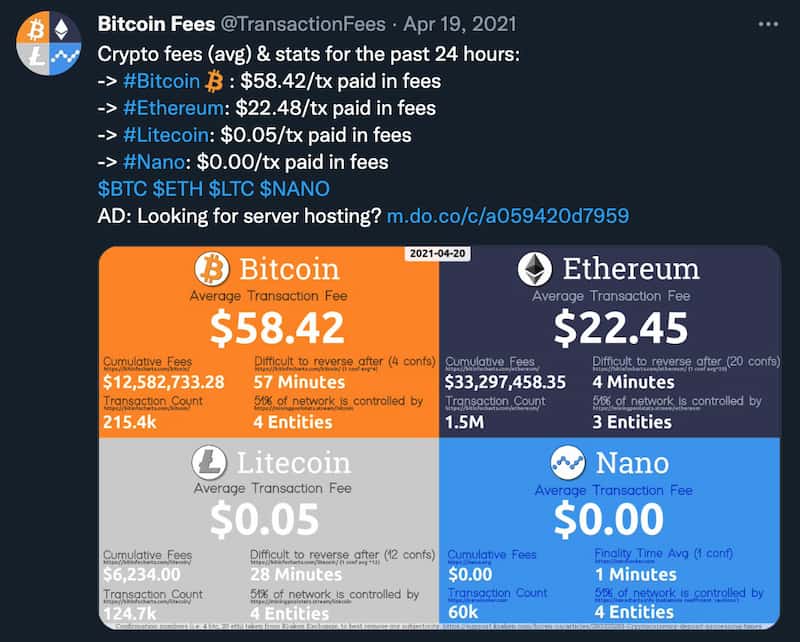 This behavior is quite common in times of high volatilitywhere many people decide use the network at the same timewhether in a market of big price drops or big price increases.

Another network that, like Bitcoin, is being heavily damaged by people trying to use it is Bitcoin. Ethereum (ETH), which also registers a strong increase in the demand for transactions, causing a significant increase in the cost to transact, through gas – ether fees. 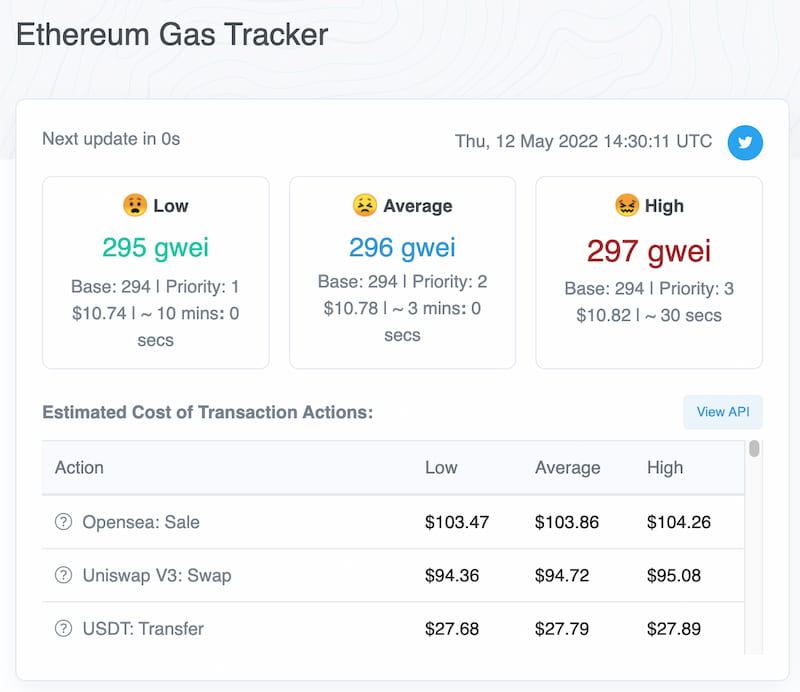 Source: Etherscan – Gas Tracker This morning, rates far above average were recorded, in addition to extraordinary events on some platforms with absurd dollar values ​​and even more potentiated by the drop in the ETH/USD price, making its value in ether even more significant. The NFT OpenSea marketplace, has recorded over $100.00 fee for collectible sales operations and the UniSwap (UNI) – decentralized exchange (DEX) – just under the same cost for trading operations within the platform.

Negative effects for business and other services

In addition to making transactions unfeasible for people with less capital – so that, for these people, the network is literally unusable at the time of high demand – some other consequences were observed this morning. The mining pool Pool2Miners, for example, reported that it would not be able to make daily payments in bitcoin and ethereum to its miners, and the only ones who were able to receive normally were those who chose nano (XNO) as currency.

The delay in receiving payments from mining ends up increasing miners’ exposure to volatility, as the longer it takes for them to receive the currency in their accounts, the more the price can change. Impairing the realization of profit on the activity in times of decline, such as the current one. THORChain also reported similar issues, with the need to stop some Bitcoin and Ethereum related servicesdue to congestion and some nodes dropping in the process.

A LUNA investor lost US$2.8 million in the recent Terra ecosystem disaster

Fri May 13 , 2022
The fall in the price of the different markets, including the cryptocurrency market, is a cause for concern for some, for others a possible opportunity. Who hasn’t heard of “Buy the Dip”? or “buy bottom?” however, the bottom you buy could be the top tomorrow, as was the case with […] 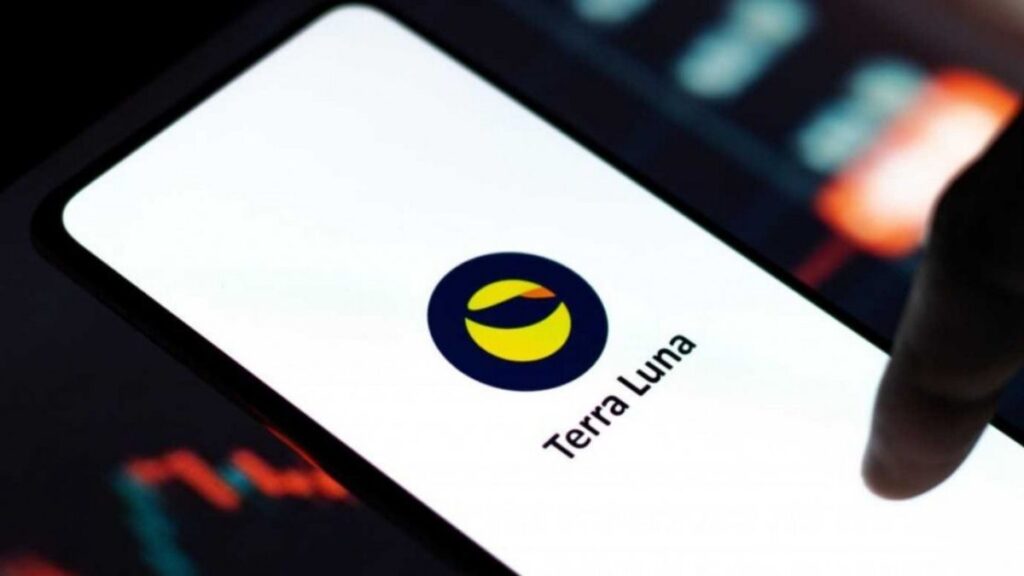