Coinbase began a new altcoin listing streak last week, starting with its trader-oriented exchange, Coinbase Pro, when it announced the following cryptocurrencies: Function X (FX); Jasmy (JASMY); tBTC (TBTC); and Wrapped Centrifuge (WCFG). Then, with the exception of tBTC, the largest exchange in the US expanded support […]

Then, with the exception of tBTC, the largest exchange in the US expanded altcoin support for its flagship platform, Coinbase.com, on Thursday (8th) and Friday (7th). Among the four cri p tocurrencies listed, two of them have already appreciated above 50% this Monday (11). See the performance of each one.

Altcoin Jasmy was the last of the group to be listed on both platforms, but leads in appreciation. This Monday, altcoin had a high of up to 70%, considering the last 24 hours, when it went from US$ 0.05 to US$ 0.08, according to data from Coinmarketcap .

As described by Coinbase, JASMY is a token issued on the Ethereum network that feeds its eponymous ecosystem. The Jasmy project is an organization that develops platforms focused on the Internet of Things ( IoT ).

Like Jasmy, Function X is also a token issued on Ethereum. According to the exchange's description, FX powers the platform of the same name, created with the goal of crossing decentralized application blockchains.

The WCFG token, despite having gained about a 10% appreciation in the last 24 hours, suffered a price drop once it was listed on Coinbase Pro, an unusual move for a crypto that has just been listed.

As described by Coinbase, the WCFG token — also based on the Ethereum network — was created to maintain governance in the staking process on the Centrifuge blockchain.

The TBTC token, also issued on the Ethereum network, was the only one of the group of altcoins listed on Coinbase Pro that did not go to the main exchange platform. According to the note, this is an asset whose purpose is to represent Bitcoin (BTC) in the Ethereum blockchain.

The price of TBTC, however, is above the world's largest cryptocurrency, BTC, trading at US$ 58.5 thousand. This Monday afternoon, Bitcoin is traded at around US$57,600; in reais, R$320,500, at the time of the text, according to the IPB price index.

Warena Game: what you need to know about play-to-earn game 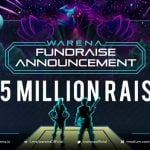