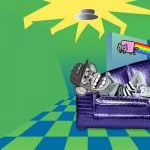 This week, the boy Ney spent R$6 million on NFTs and is now part of the Bored Apes group. THE…

This week, the boy Ney spent R$6 million on NFTs and is now part of the Bored Apes group. The repercussion was such that the discussion about the NFT market converged to several interesting economic arguments.

One perspective defended by Cauê Moura, who tried to theorize about the definition of capitalism and the exchange relations that occur in the NFT market, is that the economy is a zero-sum game , that is, that for some people to win, others must necessarily lose.

Also, on Twitter there were people who didn't understand why someone would buy a sneaker on fire in NFT. Admitting that the internet is not a means of creating wealth, they do not believe that NFTs have any utility or any value.

To put the ideas in place, and take advantage of the impact of the boy Ney to contextualize economic concepts, I will explain to you why homo economicus buys an NFT. I feel like the story is here.

Cauê Moura defends the idea that A is poor because B is rich, A and B can be people, regions, countries, ethnicities, genders, etc. Such an assumption, derived from Marx's theory of exploitation, does not admit the dynamics of history – since in the end we always progress towards socialism.

Basically what the content creator is talking about is that the economy would be a kind of cake, whose size is fixed and represents all available wealth. Thus, each individual who takes a slice is actually taking that slice from another individual's mouth.

This alternative interpretation is disheartening, as it implies that, in any and all transactions, someone would be the charlatan and the other person would be the deceived.

However, commercial exchanges do not only occur between goods of equal value. If good A is exchanged for good B, then necessarily the value of A should be equal to the value of B. Consequently, no commercial exchange could generate value, but only redistribute value. But this is not how it actually happens, as the studies of Carl Menger, founder of the Austrian School of Economics, demystify.

The economist made it clear that for something to be considered an economic good, four circumstances must be observed: there must be a human need; the good must be able to satisfy this human need; the individual must know the suitability of the thing in satisfying his need; and, lastly, the individual must have power of disposition over this thing.

In the material reality in which we exist, the vast majority of things, as they are in their natural state, do not allow us to satisfy our needs.

As long as the banana is in the bunch, we still need to reach for it with our hand and peel it to satisfy our hunger. In other words, matter has to be worked on and transformed through work (and investments).

Second, the banana's inability to directly satisfy our needs stems from the fact that we also don't know all of its possible combinations and uses.

Technology, the art of ordering matter so that it generates the desired result, does not fall from the sky either; rather, it must be discovered through investigation and experimentation, two activities that, in turn, require the use of other economic goods (instruments).

Finally, there is one more addendum. However adequate a good may be in satisfying our needs, it will be utterly useless if we do not have it within our reach. That's why we have to produce and distribute it.

The homo economicus, rational being, is a specialized producer and, at the same time, an insatiable consumer. We demand the widest and most varied economic goods and, in exchange, we can only offer our extremely limited and specific expertise. And yet, exchanges take place.

“ Why then would anyone buy a sneaker on fire on NFT? ” – ask young people on Twitter.

In each and every business transaction, each side attributes to the good it is receiving a greater subjective value than the good it is giving in return. And that's just why he makes the switch.

After all, if that weren't so—if you didn't value what you're getting more than what you're giving in return—the transaction simply wouldn't take place.

Who popularized the discovery that the value of goods is not objective, but subjective , was precisely Carl Menger. As a result, it is concluded that individuals generate wealth by simply exchanging economic goods voluntarily.

Therefore, they are resorting to a means (commercial exchanges) to reach those ends that are most valuable to them – according to the degree of personal (subjective) importance.

NFT Market is not a zero-sum game

As João Victor Morisson, the creator of Burning Shoe and co-founder of the first digital fashion marketplace in Brazil, said in an interview with Cointimes, “Brazilians really like to have possession of goods”.

He reinforces that the NFT on fire sneaker was developed precisely for enthusiasts who understand the value of collectibles and are sure that blockchain is the best place to check scarcity in the digital environment.

In short, the economy is not a zero-sum game, since during the entire process of producing goods and services we are generating wealth. But Cauê Moura's concern about charlatans is valid, since everywhere someone may want to outmaneuver you.

We have now reached the 21st century, and look at this – we are generating wealth in the digital reality. The metaverse, the gathering space of the digital world, is closely related to the future of advancing collaborative productivity.

The metaverse is also intertwined with interactive AI systems, with art, the explosion of on-demand consumption, the rise of cryptocurrencies, the notion of surveillance capitalism, the significant advance of quantum computing and so on.

As Guga Stocco, columnist for MIT Technology Review Brazil says, “this is the century of the confluence of technologies. Where competitive business models are those already created from what was built digitally. The metaverse will bring everyone together. It has no entry or exit door because it is not a 'place'. It's the surroundings."

The Observer Effect in Quantum Physics establishes that the very act of looking at a very small particle influences its behavior. Hence, generating perfect data becomes impossible, as it is not known whether the show is the same in solitary rehearsal or under the attentive scrutiny of the audience. That was one of the challenges […]