On December 27, 2015, the bitcoin unit was quoted at US$ 422, as pointed out by Coinmarketcap. It was in this year that Natasha Alves Ferreira began writing academic papers on cryptocurrency. Graduated in Law, Natasha was at that time a Master's student at IMED (Southern Faculty) and a scholarship holder at CAPES. Along with her advisor, […]

On December 27, 2015, the bitcoin unit was quoted at US$ 422, as pointed out by Coinmarketcap . It was in this year that Natasha Alves Ferreira began writing academic papers on cryptocurrency.

Graduated in Law, Natasha was at that time a Master's student at IMED (Southern Faculty) and a scholarship holder at CAPES. Together with her advisor, postdoctoral researcher Salete Oro Boff, she wrote the article “Analysis of the social benefits of Bitcoin as a currency”, which was published in the 2016 edition of the “Mexican Yearbook of International Law”, organized by the National Autonomous University of Mexico .

The authors predicted that Bitcoin “could” solve monetary problems that mainly affect the poor: money creation, inflation, lack of access to financial services in remote regions and high transaction costs.

“The popularization of an electronic currency, based on a decentralized network and without a central control, theoretically, would make it possible to reduce these problems”, they stated.

Almost six years later, with bitcoin at the time of writing this article worth US$ 61,000, Natasha talked to the Bitcoin Portal about how the technology has developed since then and what has materialized and what has not materialized in the analysis made.

Social benefits did not materialize

The researcher states that “many of the social benefits provided by the study” did not materialize due to the lack of adoption of Bitcoin as a currency – cryptocurrency is widely used today as a store of value.

“In relation to the possibility of greater Bitcoin adoption bringing concrete social benefits, in my understanding, it does not seem to me that this is a path that is being developed in this direction”, he says.

The study quotes the Austrian economist Friedrich Hayek: "According to the author, it is the State that the currency should be protected, as it is only responsible for controlling the authenticity of the coins".

Many bitcoin enthusiasts argue that the state should not be involved in currency creation. Other thinkers, on the other hand, see monetary policy as a means of applying social policies.

Natasha tends more to the first group. “What worries me is that the attempt to use monetary policies to produce social policies has no positive track record. Inflation has been a problem that has been around Brazil and South American countries for decades. Social policies do not need to issue a new currency to be successful, since this is a factor causing inflation, a problem that affects mainly the poorest and most vulnerable population”, he says.

But despite seeing and highlighting the positive points of bitcoin, Natasha does not hide a certain disenchantment with the paths that the technology has taken – mainly with regard to the environmental problem, but not only.

“From the time of the study until now, there were also problems generated by cryptocurrencies that were not foreseen at the time. With its high value, people's pursuit of cryptocurrency mining has led to an increase in energy consumption around the world. According to some reports, Bitcoin mining alone consumes more energy than Argentina. And this is a problem, as it impacts global warming and, in general, due to the increase in demand, it ends up indirectly increasing the cost of energy for everyone”, he says.

In addition, the researcher claims that another unforeseen problem, also caused by mining, is the increase in the cost of hardware.

“Today, artificial intelligence projects, which use GPUs to process complex calculations, end up costing more because of mining”, he laments.

Decentraland (MANA) rises another 250% in the week thanks to Facebook; understand the high

The week has been very positive for metaverse cryptocurrencies, which saw their prices skyrocket after Facebook changed its name to “Meta” in an attempt to put a new face on the controversial company. Indirectly, Facebook's plan to “bring the metaverse to life” helped […] 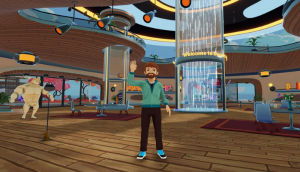