Honey Island Capital, venture capital of the founders of EBANX, and 4UM announced the creation of the investment fund…

The Brazilian Fund content can invest up to R$100 million in the cryptocurrency market first appeared in Cointimes.

Honey Island Capital, venture capital of the EBANX founders, and 4UM announced the creation of the Honey Island by 4UM investment fund.

The fund will raise up to 100 million reais to invest in fintechs and SaaS B2B startups in up to 13 early-stage technology companies, which also include cryptocurrency companies, according to a statement sent to Cointimes:

“ In the financial market, the vehicle will seek startups that operate with innovation in means of payment, investments, credit, crypto-actives, foreign exchange and insurance. ”

Honey Island Capital was created by the founders of EBANX and in just over 5 years it has become a reference in its field with investments in startups such as Omnichat, Trco, Comunica IN and Transfeera.

And it is with this same speed that the new investment vehicle wants to keep up with the growth of the local fintech market.

“The intense innovation agenda of the regulatory bodies, with initiatives such as Pix and Open Banking, and the maturation of new technologies such as blockchains, make room for the development of new solutions. In addition, digital financial services allow companies from other sectors to have an increase in scale and efficiency, reaching new customers, markets and verticals”, explains Leonardo Jianoti, partner at Honey Capital.

It is noteworthy that Brazil has 4 of the 5 fintechs with a market value of more than US$1 billion in Latin America, including one for cryptocurrencies. According to a report by the District, the Fintech sector is the one that received the most investments in the last 9 years in the startup area.

The Brazilian Fund content can invest up to R$100 million in the cryptocurrency market first appeared in Cointimes.

Technical x Fundamental Analysis – What are the differences?

What techniques and metrics to use to buy a cryptocurrency or stock? In the market we have two very traditional approaches, the...

The content Technical x Fundamental Analysis – What are the differences? first appeared in Cointimes . 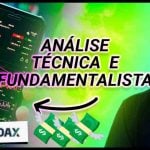