Data from a survey conducted by the Bitcoin Mining Council, suggests that 59% of the energy used in bitcoin mining comes from renewable sources. The information has been shared by enthusiasts “fighting the environmentalist FUD”, but has been questioned by the most skeptical, under the maxim of “don’t trust, verify”. Understand the controversy.

What is the Bitcoin Mining Council and who sits on the council?

Before getting into the controversy, it is necessary to understand how it came about, what it is and who is part of the Bitcoin Mining Council (BMC) – or Bitcoin Mining Council, in translation. The formation of a Miners Council was initially made public on Twitter, conceived by Michael Saylor in partnership with Mike Novogratz and bitcoin mining companies from the United States, after Elon Musk’s interest in discussing the energy costs of the activity.
Know more: First Bitcoin Miners Council Meeting, What Happened?

The creation of the council has already been the protagonist of its own controversy:
On one side – some bitcoin “maximalists” wanting to “fight the environmentalist FUD” against mining, or investors supporting the strategic decision of the existence of a group aimed at public relations and joint organization. On the other hand – bitcoiners and enthusiasts questioning the interests or the need to form a group with these objectives, in addition to the concern about meetings “behind closed doors” by miners who participate in the consensus on the network and could even “conspire” with the combination of your hashrate. Undermining Bitcoin’s decentralization. Currently, the Bitcoin Mining Council (BMC) defines itself as one:

“(…) voluntary and open forum of Bitcoin miners committed to the network and its fundamental principles. We promote transparency, share best practices and educate the public about the benefits of Bitcoin mining.”

The Bitcoin Mining Council members are:

Source: Bitcoin Mining Council
microstrategy; one of the companies with the highest equity invested in BTC, having already a large portion of its equity allocated in the asset and related companies, including board member mining companies. CEO: Michael Saylor.Galaxy Digital; a crypto investment fund that also owns capital in Bitcoin, related companies and projects. Galaxy Digital became well known for being identified as one of the creditors of Three Arrows Capital (3AC). Furthermore, its CEO Mike Novogratz has gained the spotlight with his Earth (LUNA) tattoo and another dozen other failed designs branded on his body. The other members of the Bitcoin Mining Council are the mining companies based in the United States: Some of them, present in this report on the financial health of bitcoin miners who have public cash and balance sheet information.
Know more: Which bitcoin miners will survive the crypto winter?

Controversy on research and use of renewable energy

The controversies related to high energy consumption and low energy efficiency on the part of the Bitcoin network are recurrent in the mainstream media, social networks, the corporate market, political spheres and also in crypto communities. With defenders on both sides, in each of these points of discussion. Recently, the Democratic Party in the United States carried out a study that shows the high energy consumption by only the seven largest bitcoin miners in the country, equivalent to the entire energy consumption of Houston, Texas.
Know more: Only 7 miners have the same energy consumption as a city of 2 million inhabitants Almost as a direct response to the disclosure of this study, the Bitcoin Mining Council published a press release informing that a survey was carried out among some miners that allowed BMC to estimate that about 59.5% of the entire network of Bitcoin miners uses renewable energy to power their mining ASICs.

Source: Bitcoin Mining Council PR 07/19/2022 As informed by the Council, this percentage refers to the hashrate generated from this type of energy (sustainable) and the survey was carried out with entities responsible for half (50%) of the entire hashrate generated. The first point of concern that arises is the fact that it was possible to accurately identify and contact those responsible for half of the Bitcoin blockchain consensus. Which is undoubtedly a factor of concern about network security, decentralization and privacy. But other points were also raised by Twitter users, referring to the credibility of the research, whose information was collected under the voluntary declaration of the participants, without any material evidence, which opens the possibility that some have lied, or just been confused with the definition of renewable energy. Taking into account the probable existence of a conflict of interest by those involved, the voluntary declaration should be seen with “a pinch of salt”. Confusion, on the other hand, is possible not only on the part of the miners who voluntarily responded to the survey, but also on the part of anyone who reads the report, since at no time is it specified what the Bitcoin Mining Council understands (and considers) how renewable energy or sustainable mixed power. The lack of clarity on this point leaves room for dubious interpretations and inaccuracy of the research result itself, as well as the conclusions that can be drawn from it, calling into question, once again, its credibility. Users who have questioned these points, at the time of writing this article, exactly 24 hours after Saylor’s share, still haven’t gotten a response and clarification. Whether by the Bitcoin Mining Council, or by Michael Saylor.

Importantly, the questioning and skepticism comes not only from people who are already “normally critical” of Bitcoin, but also from a large part of the bitcoiner community and even some independent miners. Among the oldest and already known critics is the DigiEconomist page, which offers data on energy consumption of networks such as Bitcoin, Ethereum and Dogecoin. In a tweet, the page satirized the communication of the news by specialized portals:

“URGENT: Contrary to any other independent research, the Bitcoin mining industry itself is reporting a surprisingly high share of renewable energy use. The discovery is based on a new approach called “trust me bro” and innovates primarily by not providing any serious supporting data.” 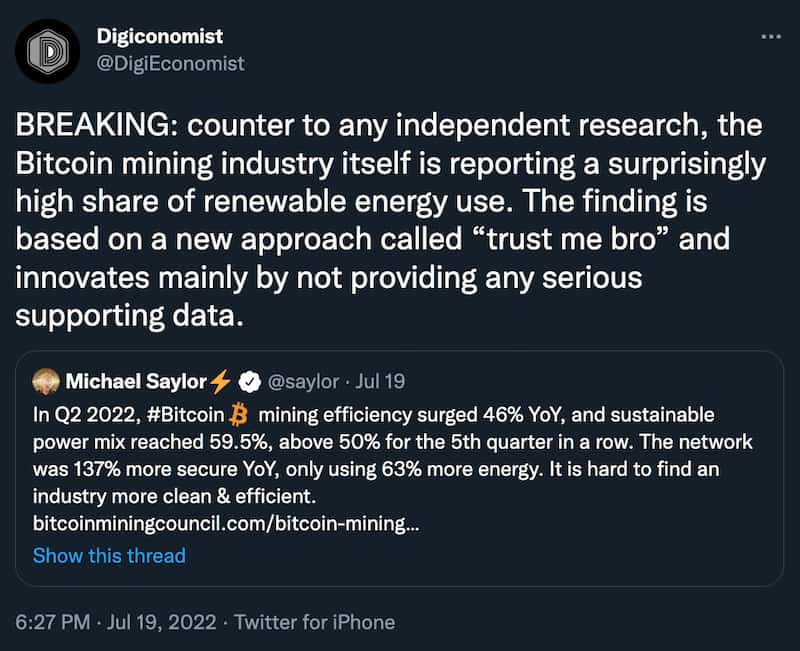 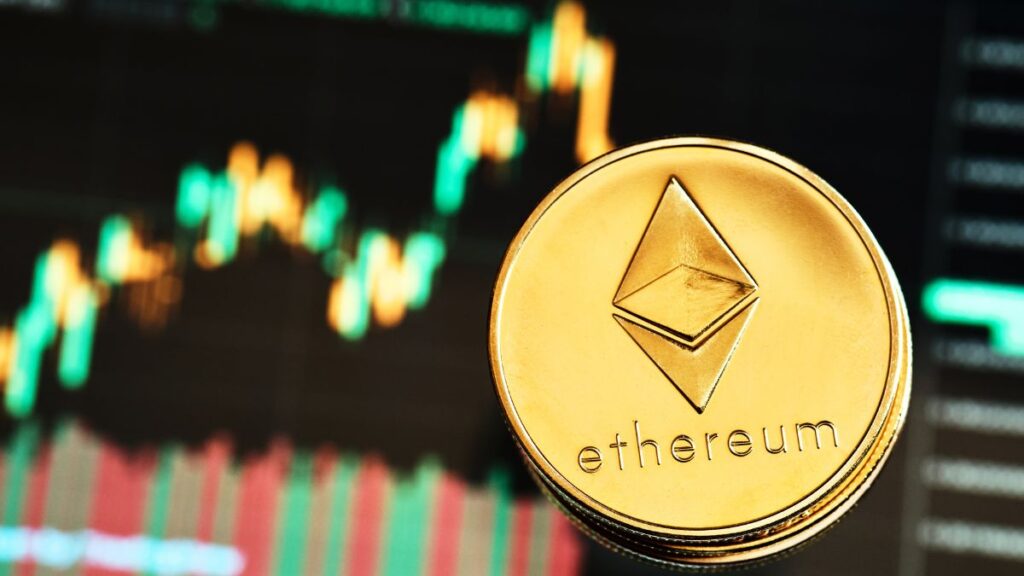