Don’t worry, this is not a boomer article saying that Bitcoin is dead. On the contrary. The developer of Samourai Wallet gave a talk at Guns and Bitcoin 2022 in Miami explaining why Bitcoin is not money, raising a very interesting thesis about what bitcoin really is and why it is great for the network.

What is Samourai Wallet?

Samourai Wallet is a privacy-focused Bitcoin wallet founded in 2015. On its website, the team describes itself as “a bitcoin wallet for the streets”, which allows the user to prevent surveillance and censorship on the blockchain. Being one of the main software focused on this problem. 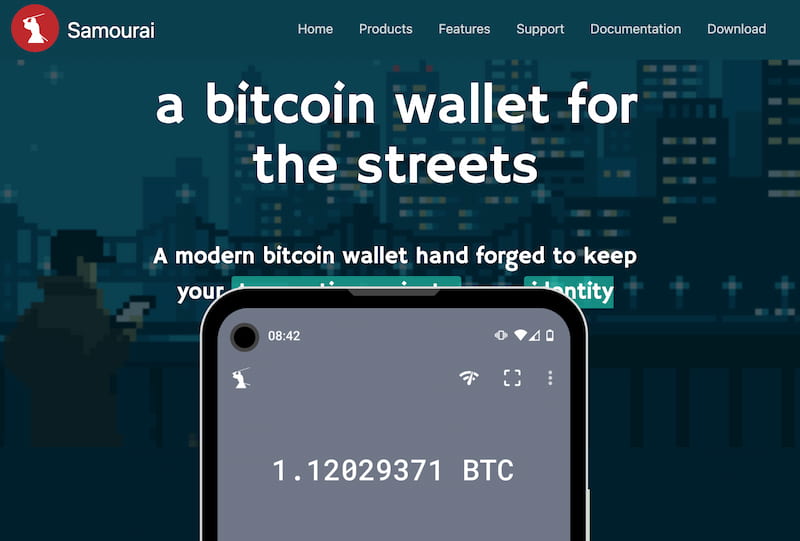 like a project cypherpunk and privacy focuseddevelopers are anonymous and much of their interaction takes place through Twitter, through the account @SamouraiWallet.On June 30, 2022, one of the devs responsible for the account shared a very interesting thread that brought parts of a talk he gave at the Guns and Bitcoin 2022 event in Miami. Libertarian event focused on weapons and bitcoin. We brought the translated thread in full to record in Portuguese, as it raises some very important questions.

Bitcoin is not money

Samourai Wallet starts by drawing attention to the whitepaper that says: “Bitcoin: A Peer-to-Peer Electronic Cash System”. Which seems counterintuitive, if our title is “Bitcoin is not money”… We will get there. The samurai then asks you to take note of two key words: Peer-to-peer (peer-to-peer, no intermediaries)Electronic cash But before we continue talking about bitcoin and electronic money, it is necessary to understand the physical money.

“Aristotle explored what makes good money in his Nicomachean Ethics. No doubt many of you have seen this before, usually when someone is trying to convince you to buy gold. But it turns out that even physical fiat dollars also deliver these characteristics.”

The characteristics/properties of physical money are: 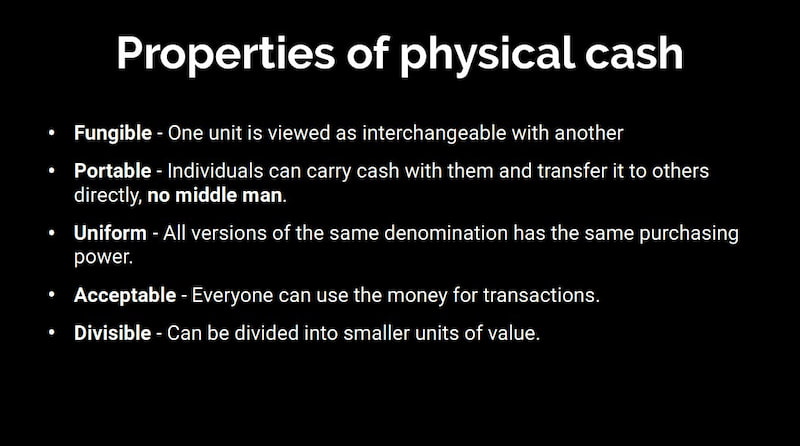 The War on Cash and Why We Need It

The lecture then goes on to explain to us that there is an attempt to suppress the use of cash (cash) by the State and the big banks, usually associating its use with criminal, obscure or outdated activities – in a kind of powerful gaslighting. All the propaganda and narrative supported by “official bodies” and the mainstream media are accomplices in this attempt to destroy cash. Legislation also serves this purpose, with many countries prohibiting, under penalty of imprisonment or fine, financial transactions exceeding, for example, €500 in ‘cash’, as in Greece. The reasons given by Samourai Wallet as to why we need cash are: It is the only form of state money that we can actually ‘hold’; Money in bank accounts is just IOU’s (“I Own You” – vouchers, or ransom promises) that need to be fulfilled by banks to regain access to our money;These IOUs have been replicated to private institutions like Paypal and Credit Cards – controlled by banks;Banks and intermediaries want to keep us trapped in their private payments ecosystem, for they want to be the necessary counterparty in every one of our financial transactions; Physical cash in kind competes with your business, so they want to eliminate it; 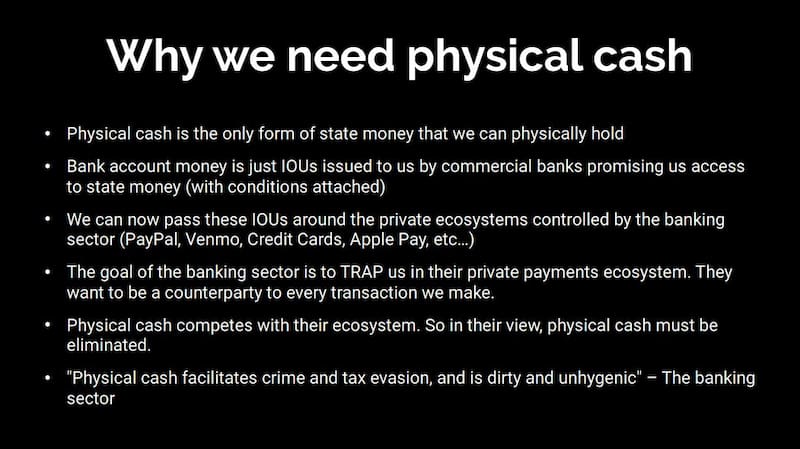 The benefits of being able to eliminate cash are many, for banks and governments, according to the anonymous samurai: Charge tax on all financial transactions;All transactions may be charged fees to intermediaries;All persons can be identified and associated with their transactions; Bank races are no longer a threat; Greater control of monetary policies through interest rates, freezing of funds, confiscations and even the use of third party money by banks to leverage themselves. 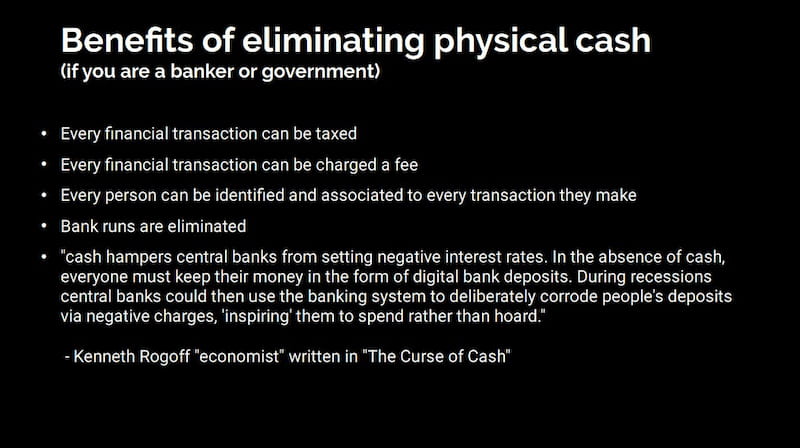 Bitcoin is not money, it is a money system

And this is where we return to the Bitcoin whitepaper, created by Satoshi Nakamoto. The Samourai Wallet dev then asks you to correct the information at the beginning, where he asked you to focus on two keywords: Peer-to-Peer and Electronic Cash. Forget for a second “electronic money” and focus on Cash System (“Cash System”). 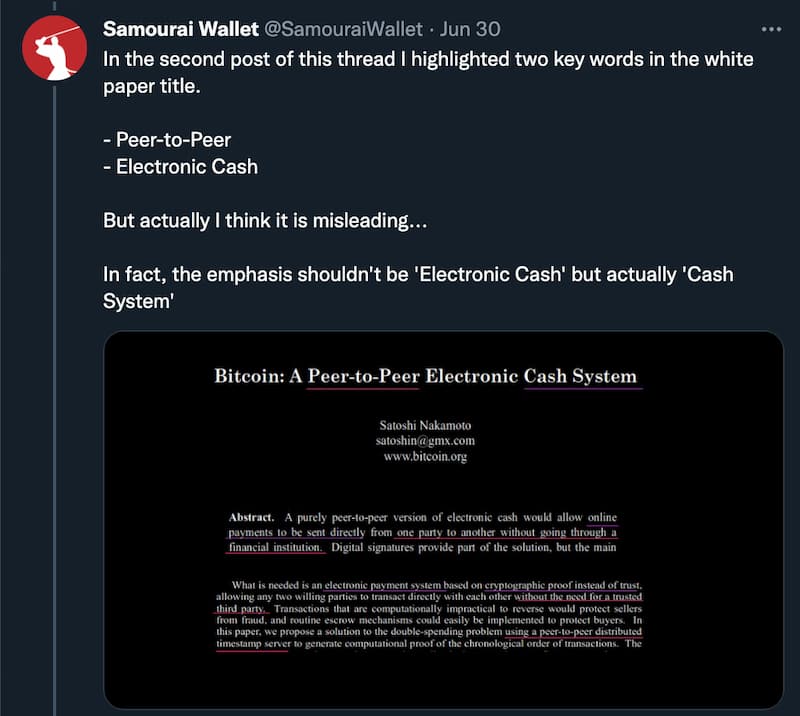 And from now on I will translate the next tweets in their entirety – so these are the original author’s words and not my Bitcoin is not money. Bitcoin is a whole a complete system. A system to create the conditions of physical money, electronically. Fundamentally Bitcoin (satoshi’s money system) is software. Unfortunately, from the early days, Bitcoin was designed as “a better money”, but this is flawed and is the reason why Bitcoin is being actively attacked in the war on money, tied to the ‘Anti Money Laundering’ regulations. Satoshi’s ‘Cash System’ was successful. The system created the conditions for an electronic analogue of physical money. For the first time, data can be money. And even more brilliantly, data is analogous to speech/expression, and speech must always be free. Let’s go back to the flawed concept of equating Bitcoin with cash. Framing Bitcoin in this way is letting the enemy choose the battlefield. If Bitcoin is money, you eventually accept that it should be regulated and controlled like all money is (yes, even gold). There are no ‘coins’, no ‘banknotes’, and no ‘currency units’. There is only one chain of digital signatures.

There is no issuance of currency. When a new block is found, a new special digital signature is created. The subscription is then publicly announced to anyone who wants to “listen”.

And yes, we are [Samourai Wallet] guilty of this metaphor, but there are no wallets. There are only keyrings that store public/private key pair data

In closing, let’s look at Satoshi’s Money System in the context of the War on Money. Bitcoin poses a threat would be to the war on money;Without tight control, the central bank’s vision of a cashless society could be severely undermined by Bitcoin; With that in mind, regulatory capture is their best bet to neutralize and control the downfall of a cash system that they cannot effectively shut down or ban. KYC is among the most effective tools they have to not only compete for the cash system but also fully capture it. More cash system users that are identified fit their strategic vision of a cashless society in which all transactions are linked to one entity.

With all the chatter about the latest statist overeach in the EU regarding bitcoin and ‘unhosted wallets’ I figured I would share some slides from my talk at @GunsnBitcoin 2022 in MiamiLet’s start with Satoshi’s white paper titled “Bitcoin: A Peer-to-Peer Electronic Cash System pic.twitter.com/eXeMZ9brwa— Samourai Wallet (@SamouraiWallet) June 30, 2022

Sat Jul 2 , 2022
A study Glassnode points out that whales with more than 1,000 BTC in their wallets keep piling up during the Bitcoin downturn. At the moment, these addresses represent 45.6% of the bitcoin supply. In total, these whales have 8.69 million bitcoins, a significant figure when compared to the 19 million […] 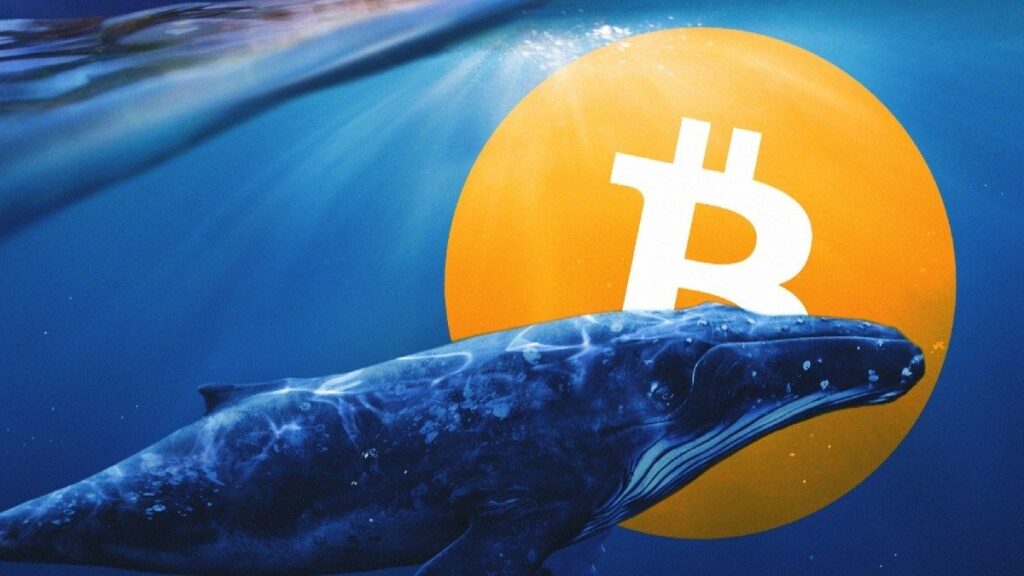