This Thursday (10/22), one of the 3 people mentioned in the Bitcoin White Paper indicated new technologies that can be used…

This Thursday (10/22), one of the 3 people mentioned in the Bitcoin White Paper indicated new technologies that can be used to improve BTC.

Adam Back is one of the strong candidates for the title of “Bitcoin creator”, he was even cited in the cryptocurrency white paper. But regardless of its participation in the origin of bitcoin, its influence on the market and knowledge on the subject is undeniable.

In conversation with Bitcoin Magazine, the developer and master cryptographer in decentralized systems revealed the possible path for the next big updates to the bitcoin protocol.

Bitcoin updates, how do they work? An explanation for children

Bitcoin is a system without an owner, without a CEO and whose control is in the hands of the users, it is the people's money. The lack of central control, however, does not prevent improvements in cryptocurrencies.

As there is also no obligation to participate in the network, any update needs the consensus of miners, programmers and users, otherwise, either party can create a fork – its own cryptocurrency, since the code is open source.

This fragile balance has moved the cryptocurrency to have backward-compatible updates, so whoever is on the network can keep going even with incremental improvements.

Think of bitcoin as a building made of Lego, you can expand it very easily. However, changing the foundations takes a lot of effort and you could end up with the building split in two.

Since no one wants a ruined building, everything that is done at BTC must fit the fundamentals. I explain this analogy further in the podcast below:

Simplicity: A New Language for Bitcoin

In this sense, one of the great technological stars is the Simplicity language. BTC has always had smart contracts, but with very limited scope.

The idea was created by Blockstream developer Ressel O'Connor.

“We hope to have that in Liquid next year… It's a very interesting idea, as it allows the creation of an extension for bitcoin… another point is that it uses a low-level language,” said Adam.

Developed by a group of renowned cryptographers, Bulletproofs was cited by Back as a way to improve bitcoin privacy.

The protocol allows checking the validity of values transacted on the blockchain without revealing it. The technology is currently used by the Monero cryptocurrency and I explain in more detail how it works in the video below:

The innovation can even be used in conjunction with Simplicity to privately and quickly execute some transactions.

When will we see these updates?

The improvements would be significant, but they are still very new and must go through a long review process; The same happened with schnorr's signatures, as described by Adam:

“In bitcoin there is a time between the technology being created until being revised and entering bitcoin, for example schnorr signatures was first discussed in 2013 and we are here implementing it in 2022”.

If bitcoin doesn't need banks, should I buy bitcoin ETFs?

The launch of the first US Bitcoin ETF, the ProShares Bitcoin Strategy ETF (ticker: BITO) helped drive the... 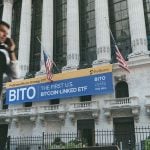