The fall in the cryptocurrency market continues with force this Monday (6). Among the main cryptos, almost all follow a bearish movement, several close to negative 10% and some crossing the double-digit barrier. Mother of all, Bitcoin (BTC) accumulates a loss of almost 4% in the last 24 hours, as shown by Coinmarketcap, being […]

The fall in the cryptocurrency market continues with force this Monday (6). Among the main cryptos, almost all follow a bearish movement, several close to negative 10% and some crossing the double-digit barrier.

Mother of all, Bitcoin (BTC) accumulates a loss of almost 4% in the last 24 hours, as shown by Coinmarketcap , being quoted at US$ 47,634.15 at the time of production of this text the accumulated drop in the last seven days is already of 16.96%.

A high among the 20 cryptocurrencies with the highest market value you can only find in one place at the moment. Algoraland (ALGO) has risen 2.01% in the last 24 hours.

Definition at Coinkmarketcap states that “Algorand is a self-sustaining, decentralized, blockchain-based network that supports a wide range of applications. These systems are secure, scalable and efficient, all critical properties for effective real-world applications. Algorand will support calculations that require reliable performance guarantees to create new forms of confidence. Algorand's mainnet was launched in June 2019, and was able to handle nearly 1 million transactions per day as of December 2020.”

reasons for the fall

With Bitcoin's prolonged decline, experts are seeking to understand what is causing the asset to lose value. The cryptocurrency analyst and experienced trader, Marcel Pechman, published on Saturday (04) on his Youtube channel, RadarBTC Bitcoin & Cryptocurrencies , an analysis of the recent fall of bitcoin .

According to the analyst, this time there was a specific drop in bitcoin that can only be explained after some observations about the last historical high, which occurred on November 10th of this year, when the BTC hovered around US$ 69,000.

At that time, said Pechman, bitcoin was already strong, motivated by the launch of a Bitcoin ETF, the projection of US inflation and the imminent continuity of stimulus packages to the population evidenced by the then president-elect of the USA, Joe Biden.

“At that moment, everyone was thinking that bitcoin was going to rise non-stop,” he said.

However, the BTC stopped rallying when the SEC rejected the “physical” Bitcoin ETF registration application by US investment manager VanEck. That's when the downward trend began, Pechman said, citing the November 12 date.

The unfavorable situation became even more accentuated when regulators and congressmen began to address issues related to the regulation of cryptocurrencies and companies in the sector, basically with the aim of limiting the issuance of stablecoins . The US Congress then scheduled a hearing with companies in the sector after notifications requesting information about the establishments. 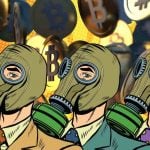