Michael Saylor, owner of approximately 18,000 bitcoins and CEO of the world's largest publicly traded BI company, went to the Nomad Capitalist channel last Wednesday and revealed some interesting strategies.
There, Saylor gave a history class and explained how the world's richest families preserve wealth and avoid taxes.
“If you are really smart… First, let's talk about creating and preserving wealth. The richest families in the world, the way they got rich is that they created assets or bought assets and keep them forever and never sell. "
As an example, Saylor cites billionaire John Malone known for his media empire. Malone owns Liberty Media, which in turn owns the Atlanta Braves baseball team and also owns Formula 1.
“You know, Jhon Malone never wanted to pay capital gains, you never pay long-term capital against short-term capital gains, and they don't generate income. They have assets that they appreciate in value and they borrow against that asset, they mortgage their buildings, buy football teams and borrow against the assets, they borrow against art. ”

This philosophy of holding assets is at the root of bitcoin. One of the best known memes among bitcoiners is hodl, a term with a similar meaning to hold that encourages the accumulation of digital assets and hoarding even in times of high prices.
Saylor follows with his tips and talks about the advantages of taking secured loans in good quality goods, which we already pointed out in Cointimes in the article “Regulated by the BC, Fintech offers a loan with guarantee in cryptocurrency”:
"Whatever, you buy the highest quality asset, you keep it forever and then you borrow it and there are no cash taxes you borrow, there is no income tax, and there will be no tax on the asset either, as you will never sell.
….Try to figure out how to lower your taxes. How about just not selling? Now what you should do to not sell is buy the best asset, if you buy the most immaculate, technically superior and long-lasting asset, there is no reason to sell your bitcoins. You can give it to your grandchildren and it should last for 100 years, 1000 years. Okay, it transcends a company, a country. “
The businessman highlighted the difficulty of maintaining some assets in case of tax increases.
“If I had 100 million dollars in land in California, the state could tax it and I can't move it so I will have to sell it at some point and then I will be taxed. If I buy $ 100 million dollars in shares, I am in the hands of the stock exchange or the custodian and all regulations and maybe income tax is levied on capital gains, of course, I can avoid capital gains if I don't sell. However, there is a risk of competitors, the company ends up being uncompetitive, I may have to sell because it does not have a monopoly on pure money. “
For him, btc is “pure monetary energy” with great mobility and serious advantages against gold:

“What is the best asset I can buy? Pure monetary energy, there is no CEO, no company, there is no Iphone 11 not to like it. And by the way, if California changes its taxes, then move to Wyoming, if it changes rates then move to Florida, when they move, go to Puerto Rico, if you don't like it go to Singapore…. . By the way, if I had my gold in New York it would be a little difficult to move it to Singapore, but if I have my bitcoin at a bank in New York I I can move it in 30 minutes for 5 dollars. “

Invest in cryptocurrencies with security, high liquidity and the lowest rates on the market.
NovaDAX: the most complete exchange in Brazil with more than 25 cryptocurrencies listed and the best customer service score.
Discover novadax.com.br

Sun Jan 31 , 2021
BB Investimentos released on Friday (29) its recommended portfolio of 5+ shares, according to a document sent to the market. Petrobras (PETR4) and Weg (WEGE3) remained in the management portfolio. Eneva (ENEV3), Lojas Quero Quero (LIQQ3) and Portobello (PTBL3) entered. B3 (B3SA3), BTG Pactual (BPAC11) and Magazine Luiza (MGLU3) were […] 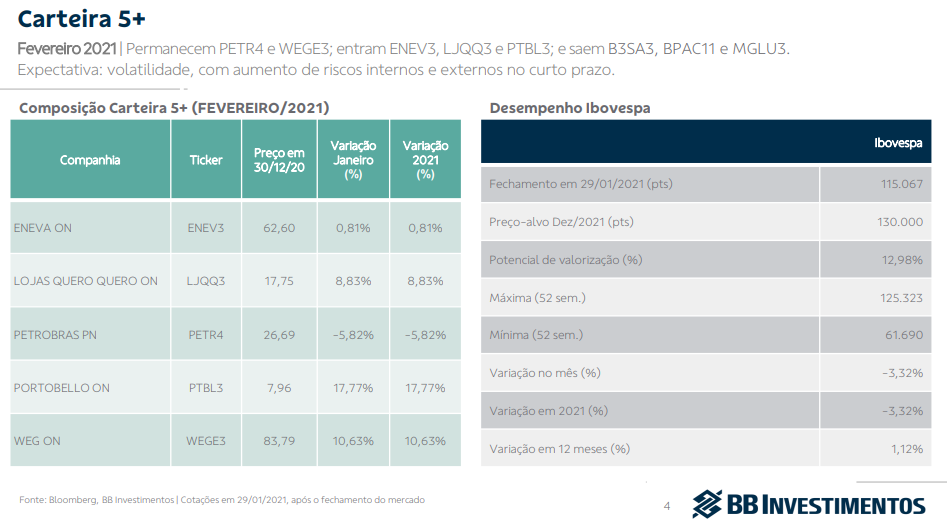