In the series of stories about Brazilians living abroad who are helping to innovate in the cryptocurrency industry, the Bitcoin Portal speaks with André Neves, the chief technology officer at Zebedee, a company he helped found in 2018. Zebedee supplies 'Infuse' technology for game developers to integrate bitcoin into […]

The post André Neves: the Brazilian who helps bring bitcoin to the gaming world first appeared in Portal do Bitcoin .

In the series of stories about Brazilians living abroad who are helping to innovate in the cryptocurrency industry, Portal do Bitcoin talks with André Neves, chief technology officer at Zebedee, a company he helped found in 2018.

Zebedee provides 'Infuse' technology for game developers to integrate bitcoin into their creations. In Counter-Strike (CS:GO), for example, there are already specialized servers where players can earn satoshis for every game they win.

All of this is possible thanks to Lightning Network, a second-tier solution that ensures bitcoin micropayments are made instantly and with almost no player fees.

As CTO, the Brazilian leads directly from New York all the technology development part of the company, which is currently in large growth, with more than 25 employees spread across eight different countries. Earlier this month, Zebedee raised US$ 11.5 million in its first round of investments.

To get to where he is today, 28-year-old André Neves had to leave Brazil very early, when he was just 14 years old. Before settling in New York where he currently lives, he spent time in the UAE with his family, as his father worked in the oil business.

Due to this distance from his home country, he decided to move to the United States when he finished high school instead of returning to Brazil.

When he arrived in New York, André studied electrical and electronic engineering at the New York Institute of Technology (NYIT) and graduated in 2015. Although he was already interested in computing at that time, he was not yet in the cryptocurrency sector.

“I heard about bitcoin for the first time, like everyone else, through an acquaintance who was my roomate at the time. I think it was in 2014 and as soon as I started studying more I noticed that there was something big there”.

André didn't dive headlong into the crypto industry when he graduated from college. In 2016, he started working at Big Human, one of the biggest design studios in New York that had companies like Facebook and Snapchat as clients. There, the Brazilian was the leader of a team of 16 programming engineers.

“That's when I said 'I can't create things for others anymore', I thought I had a bigger purpose that I was ignoring”. André says that at that time he was already “crazy with bitcoin”, he spent hours and hours studying the technology until he decided to dedicate himself full time to cryptocurrency.

from Chaincode Labs, a bitcoin research group famous for its seminars.

“I was invited with nine other people to form Chaincode Labs' first Lightning class. The developer goes there for a month and they teach you everything about the technology”, says André. He reckons that moment was decisive for him to decide to go all out for the cryptocurrencies. "I've been hands down since then, this is the future."

The creation of Zebedee

When he finished the Chaincode Labs course, André Neves met Simon Cowell and Christian Moss through mutual referrals and together, the trio founded Zebedee in 2019.

“I find it interesting because I come from systems and platforms development, my CEO (Simon Cowell) comes from financial services and exchanges, he worked at Bitstamp. Christian, on the other hand, is a game developer, he understands a lot about the games part”, explains Neves.

By combining the expertise of each, the company has developed a series of tools that game studios need to use bitcoin and the Lightning network to drive their productions in the field.

“Our view is that the virtual economies that exist in games will be much larger than the 'real' economy, because they have no strings attached. I can make a payment from the US to Brazil in seconds, something I couldn't do with physical money”, says Neves.

The Brazilian explains that the Lighting Network technology is central to Zebedee, as it allows thousands of nano transactions to be made within the games with almost no fee cost.

“In the same way that the internet made information become data that can be sent, bitcoin and Lighting do the same thing with money”, he compares.

Now that Zebedee is more mature in the market and has a consolidated team of professionals, André explains that he doesn't need to be as hands-on as he was at the beginning of the company, but is still responsible for developing part of the system.

Keeping an eye on Brazil

The developer says that although his family is still in Brazil, he doesn't plan on moving back to his home country. “After I moved here, I think there is no going back, life is different”, he explains.

Even though he is far away, he continues to keep an eye on what is happening in the country and that Zebedee is seeking partnerships with Brazilian companies. “A large part of our users are Brazilian, for various reasons. Brazilians love games and Brazil is one of the biggest countries in terms of the number of internet users, with young people adopting new technologies very quickly”, he says.

However, he does not fail to point out that regulatory and tax issues are some of the obstacles that exist for a company in the crypto area to expand into a new region, but he welcomes the path that the industry is following in the country.

“From what I have seen, the Brazilian market is still very young, but it already has some big players like the Bitcoin Market and other exchanges”, he assesses. Finally, he also recognizes interesting innovations that have emerged in the country such as Pix, something that he already sees potential for implementation with bitcoin.

The post André Neves: the Brazilian who helps bring bitcoin to the gaming world first appeared in Portal do Bitcoin .

Elon Musk dominated the cryptic world on Twitter for the past week. The CEO of Tesla and SpaceX was in the crosshairs of Senator Elizabeth Warren and immediately became defensive. He also made a big announcement about Tesla and dogecoin (DOGE) and then was a topic among Turkish Twitter users. Melania Trump, former first […] 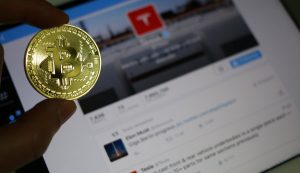