The high interest rate and the difficulties in accessing rural credit have been a matter of concern for agribusiness, which is now looking for alternatives to finance with cryptocurrencies. In early February, the Confederation of Agriculture and Livestock of Brazil (CNA) sent a letter to the Minister of Economy, Paulo Guedes, demanding solutions. The entity asks for a complementary bill that recomposes the 2022 Budget and guarantees the necessary resources for the sector.

Representatives of the sector ask the government for a solution for the resumption of the release of controlled financing for funding and investment. This discussion, in the middle of the summer crop harvest and the beginning of the planting of mid-year crops in Brazil. in 2022, as well as the much-needed renegotiations of credit repayment terms in regions whose agricultural production was significantly impacted by drought or excessive rains”, justifies CNA president João Martins in the official letters. some companies that bet on this cryptocurrency market backed by Brazilian agribusiness project a billionaire potential for the coming years. Some assets that have already been launched may be an option for those who want to bet on the sector without having a farm or for farmers who want to buy inputs and pay with production, in operations similar to the “barter”. Barter is a negotiation that takes place between the rural producer, the distributor of agricultural inputs and trading. Barter’s operation consists of exchanging inputs for production, where the distributor releases them and the producer pays this purchase on time, with part of what he will produce.

$1 billion over the next five years

One of the pioneers in the segment is the Argentine start-up Agrotoken, which in 2021 launched three digital currencies backed by agricultural commodities, or stablecoins. The first was Soya, whose unit represents one ton of soy. Then came Cora and Whea, backed by corn and wheat, respectively. The Minasul cooperative, which operates in the coffee sector, launched in July 2021 another rural digital currency, the Coffee Coin. Each one is equivalent to a kilo of coffee – one of the agricultural commodities that have appreciated the most in recent months – from its stocks. So far, 60,000 tokens have been placed on the market. They offer the option for other people to participate in this market, as coffee producers have the advantage of preventing the aging of the crop by converting them into cryptocurrencies that can be used in their own cooperative for the purchase of inputs. Another initiative is Culte Coin, launched by the start-up Cult, which focuses on helping to finance small rural producers. Culte, which, among its services, offers an online store for producers, a digital account and issuance of a ticket. From the implementation, holders of Culte Coins will have access to exclusive areas of the marketplace. There, farmers, agro-industries and input suppliers will make their products available for commercialization. CulteCoin is a token that will be used within this ecosystem. The company intends move around US$ 1 billion over the next five years after the start of public sales of the tokens, as highlighted by Cultem partner Bianca Ticiana. Initially, a pre-sale of tokens was carried out, equivalent to 10% of the intended total.

The new technological alternatives, especially cryptocurrencies, will greatly assist in the early financing of agricultural production. The market to be explored is voluminous. From July of last year to January of this year (first seven months of the current crop year), rural credit contracts related to the 2021/2022 Crop Plan totaled BRL 174.005 billion, according to data from the Ministry of Agriculture. The amount is 31% higher than that recorded in the same period of the 2020/2021 cycle. Controlled financing totaled R$117.767 billion (+32%) and free financing, R$56.239 billion (+28%). 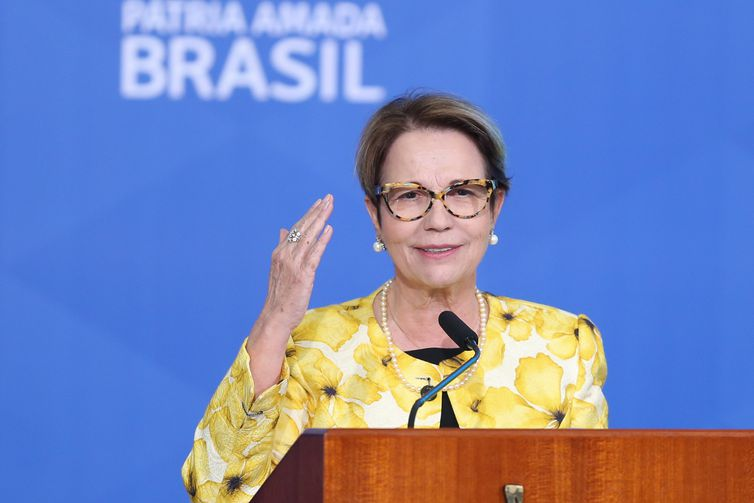 The Minister of Agriculture, Livestock and Supply, Tereza Cristina, during the launch of the 2021/22 Crop Plan at Palácio do Planalto – Source: Fabio Rodrigues PozzebomIn letters sent to the Ministry of Economy and FPA, the Confederation of Agriculture and Livestock of Brazil (CNA) ) warns that the current situation brings insecurity in relation to credit also for the next crop year. “We are also concerned about the increase in the cost of earmarked and free credit in the 2022/2023 and the possibility of lack of resources to finance the agricultural sector, resulting from the rapid rise in the basic interest rate. The increase in the cost of credit should cause inflation to accelerate and compromise the country’s own economic growth”, says the CNA. And with the Selic high, there is not much output and the market for machines has increased in sales volume and price”, says Estêvão, noting that the segment moved around R$ 70 billion last year.Read more: Buy Bitcoin on Coinext
Buy Bitcoin and other cryptocurrencies on the safest exchange in Brazil. Register and see how simple it is, visit: https://coinext.com.br

Cardano will have its own ZK-Rollups, design revealed

Fri Feb 25 , 2022
Orbis, the first scaling solution for Cardano (ADA) that is configured to take advantage of zk-rollups, presents its design and roadmap. The Cardano DeFi ecosystem (ADA) will have its own scalability solution that moves calculations off-chain to reduce pressure on the Cardano mainnet. Cardano and zk-rollups: What is Orbis? The […]